A year ago around this time, I was debating if I should sign up to do my first marathon. I doubted myself. I didn't think that I could do it. I didn't think that I was good enough. But in the first week of the new year, I filled out the online entry form, closed my eyes, and hit the "check out" button and made it official! Then the training began. 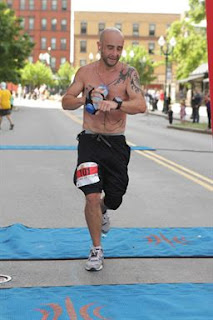 On June 3rd I completed my goal of finishing my first marathon!! It was a tough one but I had done it! I became a marathoner!!
-

Also this year, I became active in volunteering at a lot of races for the running club. Volunteering has help me appreciate the time and hard work that goes to putting on a running event. I have done it all from passing out place numbers at the finish line, to helping at water stops, to timing races, and even working the Boston Marathon expo (not sure what happened to that post). Volunteering has been fun and I will continue to do it again this year. I've said it many times before, you haven't volunteered at a race, I strongly encourage it!
-

I met 2 bloggers in real life this year. Michelle from Running with Attitude at a 10 mile race in Foxboro, Ma. And also Bill from Impossible in Nothing at the Suftown Half. After following their blogs for a while, meeting them was like meeting celebrities :). Hope to run with you guys again!
-

In October, I completed my second marathon. 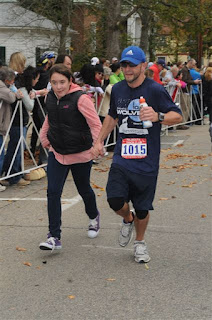 It was a fun filled weekend with the family that finished off with me doing the marathon. One of the most memorable weekends of 2012!
-

I still have 5 miles scheduled for Monday morning, but as of right now, I have ranked up 1,142 miles on these two tired legs of mine. That's like going from Boston, Ma to Atlanta, Ga. I have run more days than I didn't this year. I don't think I'll ever top a year like this in miles.
-

The "cherry on top" moment of the year for me, as most of you know, was getting an entry for the 2013 Boston Marathon. 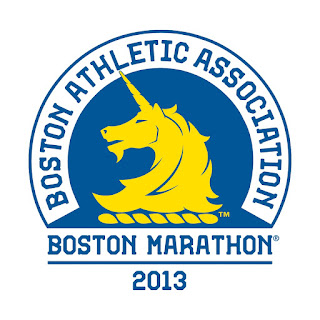 This will make 3 marathons for me in less than a year. For someone who had never run a marathon previous to this year, this is just nuts! If it wasn't for the fact that it's Boston, I probably wouldn't do it. But a opportunity like this might only come once in my lifetime. I gotta take it!!
-

I have no other planned races for 2013 like some of you. I just want to concentrate on finishing Boston. I might throw in a half marathon as part of the training, but that's about it. I plan a well deserved break after this is over. 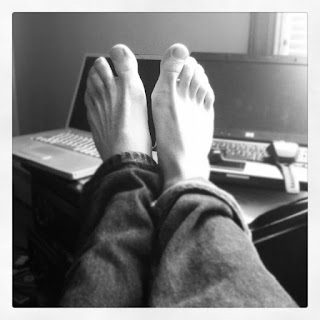 I want to get more involved with the running club this year. Definitely will continue to volunteer, but they also have monthly meetings to discuss club related topics and they also have positions you can hold in the club. I would like to learn more about being a race director or a volunteer coordinator or even be in charge of timing\scoring for races. 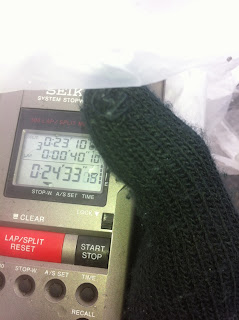 I did timing for a handful of races this year and I really enjoyed it.
-

My biggest goal for 2013 is to stay healthy, learn more and become a better, smarter runner. I love running and I want it always to be part of my life. I love the running community and love meeting people with the same passion. Through my Facebook page and though Twitter, I have connected with many runners out there. Though I do not have hundreds of followers as someone like Detroit Runner or Running /w Spatulas, I do have more than I could have ever imagined and it seems to grow daily. I love connecting and the support that comes from social media.
-

I wish you all a New Year filled with success, love, health, joy and lots of running!!!

It was the proverbial "cherry on the sundae" meeting you at Surftown....one of the highlights of my year!

Here's wishing you and yours all the best in 2013....I have a feeling it's going to be a GREAT year!

Ha. Thanks for the shout out. You had an incredible year! I'm so jealous of you getting to run Boston but so happy for you as well. I completely agree you must do it - it's freakin' Boston man!!!!

What a blessed year you've had! All the best for 2013 and for Boston!

Man I might be as excited as you are about you running Boston - I can't wait to hear how it goes for you! And great job on your first marathon this year - I remember reading your report after you ran it, awesome! Have a great week!