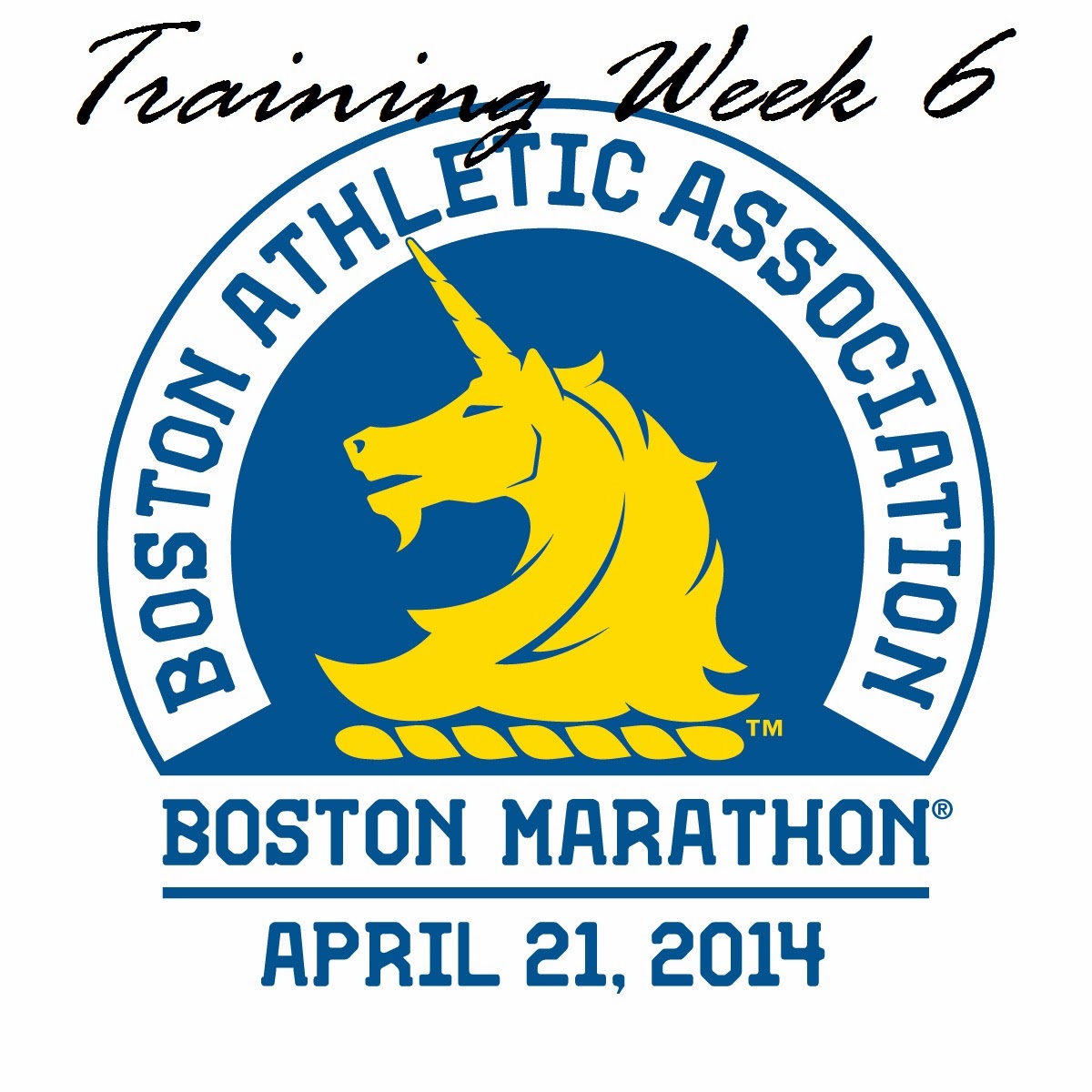 Week 6? Really? That's it? I dont know why, but it feels like I'm much more farther along than that. Its probably because mentally I put myself in marathon mode well before my official  18 week plan. It's all good though. Not complaining at all. Last week's long run was a 14 miler, this week is a scale down week. 10 miles on the schedule.

Training for Boston this time around has been nothing but a blast for me. If I run 5 times during the week, three to four of those runs are with friends or with people I just met thanks to our newly formed running group here in Webster. We have at least 3 scheduled runs. Five miler Monday mornings at 5am , a Tuesday night pub run that offers a 5 miler and a 5k and drinks after :) , Thursday afternoon run (5 to 9 miles) and a Saturday long run.

The pub runs have been great way to meet new people. We put the word out on our FB page and we meet up at a local sports bar around 6pm. Most runners do a 5 miler, but we do offer a 5k to those who run slower or don't want a longer distance. It's a fun run and our motto is that no one is left behind. This weeks pub run was canceled due to the snow storm we are getting, but last weeks cold and rainy run had 11 runners! 11 runners!! I met two new runner this night. Surprisingly awesome turnout! 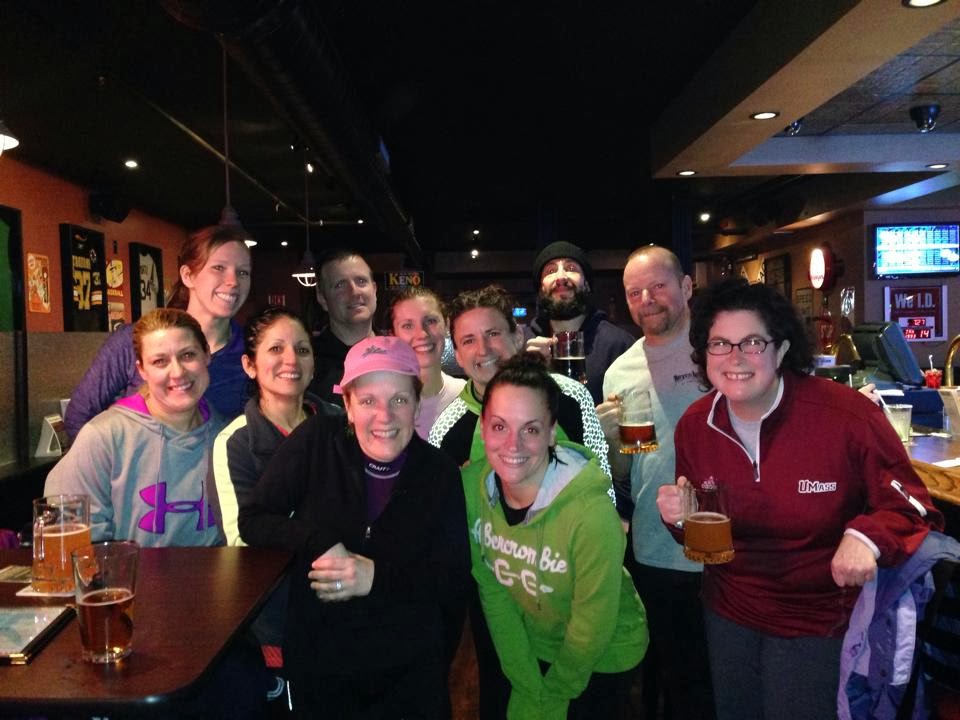 Here we are enjoying some post run cold ones.

The Saturday long runs have been mostly initiated by me or by my friend Kristen who is also running Boston. We have been able to pull in others that are willing to the longs run with us just for fun. Those runs have been great. The pace is usually at a comfortable 9:30 min pace filled with great conversations and laughs all the way through. I'm enjoying every minute of it! 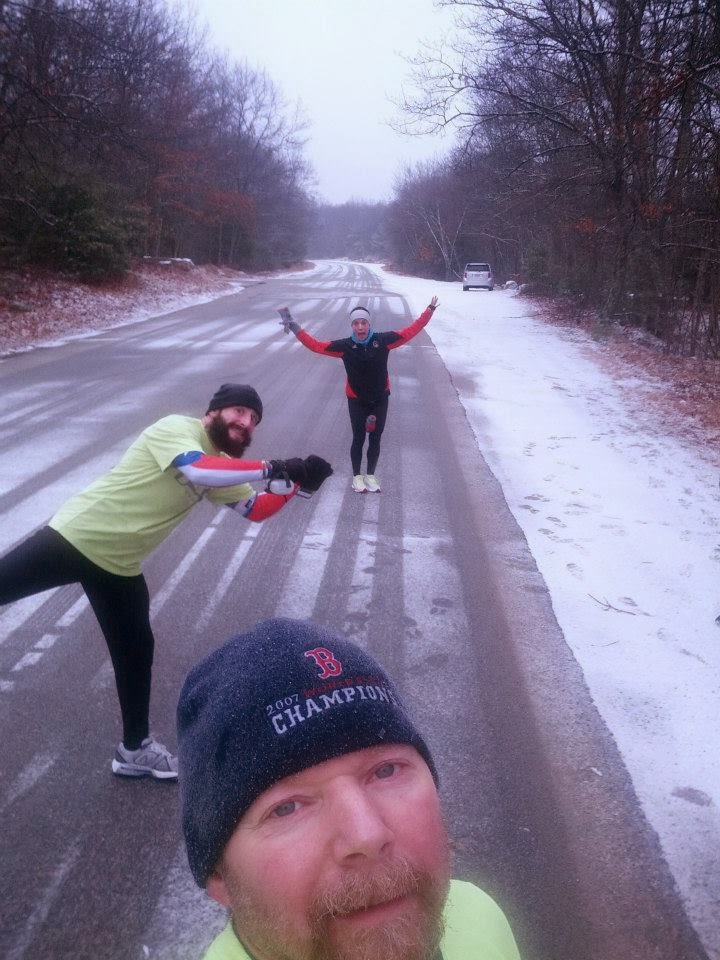 This is me,  my friend Kristen and Jim stopping to take a quick pic.
This 14 miler was a good one and went by really quick. We could have probably done 20 miles easy that day! :)

Next race on schedule for me is the Hyannis Half marathon a couple weeks away on February 23. This for me will be my first half since September of 2012, the Surf Town half. That half also happens to be my current half PR of 1:36. Not running a half in so long kinda makes me nervous for this one. I want to go all out and PR again, but at the same time I dont want to over do it. The week after the half I'm am doing Stu's 30k so I want to save a little something for this one ;)

-
So that's it for this update. Thanks to everyone that posted in my last post about my cold run. I am so very jealous of those of you that live in warmer areas of the country (or world). I would give anything to run in the hot humid weather of summer!

Week three of Boston Marathon training is in the books. 15 Weeks to go! This week's "long run" was only an 8 miler. Something most of us can do any weekend, right? The only twist was that it was a negative 6 degrees when I went out to meet some Facebook friends for this run. We had decided on an out and back since the roads weren't that great from the snow storm we had two days prior.

The run itself was uneventful. There was some slick spots, some snowy spots and a little bit of yelling at cars, nothing new. It didn't even feel that cold, to me anyways. Only my thumbs. Few minutes into it, I could already tell that my beard was freezing up. Halfway through, cars were driving by and people were pointing at us. It wasn't til the end that one of my running partners said I look like Santa. 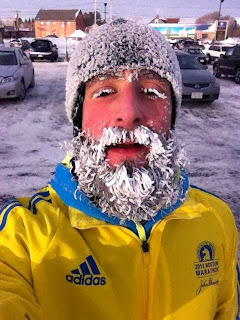 Eight miles done, and we could have done fifteen. We were feeling great! 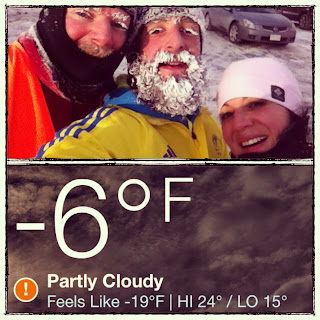 I'm so glad there are other nut jobs like me out there!!
My two new best friends Jim & Pamela!
-
-

The miles start to go up from here. The shortest long run on schedule is a 10 miler three weeks away. Other than that, it's 13 next weekend and 14 after that. Luckily for me I have plenty of people to share these miles with and hopefully only few more weeks of cold weather.

I'm still debating throwing in a half marathon into the training. A bunch of people I know are doing the Hyannis Half on Feb. 23rd. which will work out for me scheduled wise. But not sure if I want to spend the money yet. I have a feeling I might fall to peer pressure on this one. We'll see.

How's everyone handling the cold temps here in the states??  Are you still running outdoors?