So I mentioned before that I haven't done a race since Thanksgiving. As I was reading through the blogs that  follow, I saw that Michelle over at Running with Attitude was running a 10 miler in Foxboro. As I was checking out their site, I saw that the deadline for registration was that same night. So at a whim, I signed up! My training called for a 9 mile run this weekend, so a 10 mile race wasn't really out of the question.

Race started at 11am. I arrived at 9am to pick up my race packet. It was a good thing I did because within the hour the place was mobbed! The line to pick up your packet was just about out the door of the building! 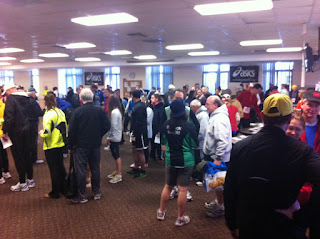 There was literally no one when I walked in there to pick up my stuff.

We all walked to the starting line of the race and while waiting there, I expected a speech or maybe instructions through a megaphone or something, but no. While I was looking around to see if I saw Michelle and her husband, I hear a gun shot. I looked forward and saw smoke and the runners in the starting line take off! I started my Garmin and I was off too!
My plan as to pace myself all the way. Start off slow and hopefully pick up my pace the last couple miles. The first mile was basically weaving my way through the crowd. The second mile was getting my self situated. The scenery of this Foxboro race was awesome! I have run races in Foxboro before but never through these streets. It was mostly back roads and some lake side views. It was very scenic race.
The race was going as planned. I was pacing myself all the way through. I was controlling my breathing and only passing people on hills. I do good on the hills, so as long I pace myself everywhere else through out the race, I would be good.
In my training, I always like to pick up my pace last mile or two of my run. I planned to do the same in this race. At about mile 8.5, I picked up the pace and went to town! I passed more people during this time than I did the whole race!! 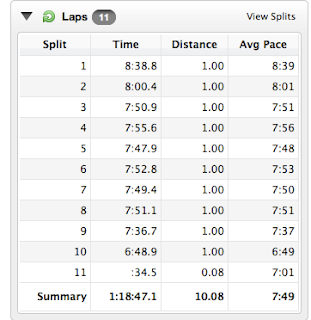 I'm really impressed with myself with this run.  I started off slow,and paced myself all the way through. As you can see, the last 2 miles (9 & 10), I really picked up the pace and kicked ass! I felt really good. I think maybe at the very end I ran out of steam. But it was good enough to push me towards the finish line.
My Garmin read 1:18:47, but officially it was 1:19:06 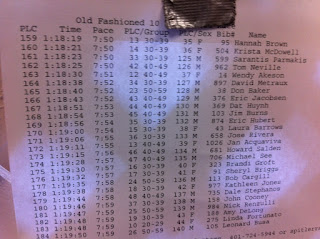 At the end of the race I went for a cool down run in the direction of the runners headed for for the finish line. I ran into some guy that was flagging me down. I stopped and took off my headphones. He started to tell me that he sees me almost every day running through Southborough. I work and run during my lunchtime in Southborough during the week. I was surprised, but I guess I shouldn't be. I've been running these streets for the past three years. It feels kinda cool that someone recognizes me.
Shortly after that, I saw Michelle heading towards me. I looped around and started to run beside her. I introduced myself and it was funny cause she knew who I was. I ran with her almost to the finish line where her husband was waiting for her. It was a quick meet and greet. I was honestly kinda nervous. I have never met anyone from the blog world before. So it was like kinda meeting a celebrity.  I didn't want to be that weirdo fan.... LOL

...... Michelle, you and your husband seemed like real down to earth people. Glad to have briefly met you guys. Hope to see you guys out in future races!

As I was heading towards my car, someone mentioned that there was free food for the runners inside the same building that the the race packets were in. Free food? 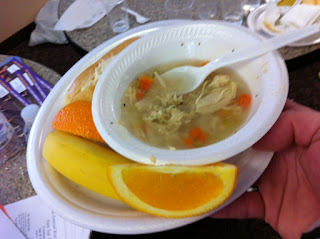 Dont have to tell me twice!! Pictured is a chicken salad sandwich, chicken noodle soup a banana and some orange slices. They also had pasta with meat sause, but I just settled for what was pictured.

Today was a good day. I'm glad I decided to run this race. Next weekend training calls for a 11 mile run. I will most like do a run I've done plenty of times. This week I'm on vacation, so my runs will be done here in Webster. 3-6-3... shouldn't be a problem at all.

Hope you guys have some great runs this week!!

What a fun race for you! A good hit-out, meeting new people, and that post-race food!!

What a great race! You paced yourself perfectly - congrats!

Look at those splits! Sweet!

It was great meeting you! Hope to see you at future races :)

That was a really, really well paced race! Nice job. You executed it to perfection.

Fantastic job on the race! Those splits are a real testament to your pacing skills. :)

She Is Out Running said...

I just signed up for this race. Great report! I am glad it is a scenic course. Fantastic strategy too! I just ran a 10k and totally went out too fast the first half and lost steam at the end. I am new to the running blog world and have my own (shameless plug: http://sheisoutrunning.blogspot.com/). I, too, used to smoke (20+ years of Marlboros reds and American Spirits), but I also ran during those years too. I didn't see http://www.jog-blog.co.uk/ on your list of blogs. She's an English ex-smoker and very funny. Anyway, check out my blog if you have a moment. It's brand new so I would love some input. I'd like to get it looking a little more legit, like this one. Thanks!