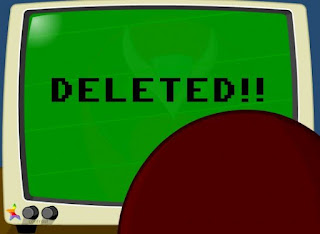 So I deleted my last post. If you were unlucky enough to read it, I apologize. Sometimes I let the little things in life get to me. I wrote about it before thinking (sorta like opening my mouth before thinking.) I do that a lot too... too bad I can't press delete when that happens... :(

Anyways...... Marathon is a few days away. I have 4 miles left to run per order of my training schedule. 2 tomorrow and 2 on Saturday. I can't even remember the last time I ran just 2 miles. It was hard to do just 3 today. But it was hot and humid today so I was kinda glad it was a short one.

Speaking of weather.... I have been keeping my eye on Sunday's forecast. At last check it's suppose to be sunny and 70 for a high.

Have a great week everyone!

I love running this much!!! 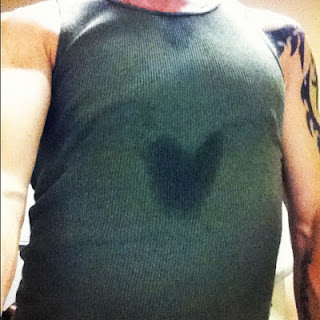 This is a weird phenomena that honest to goodness happens almost every time I run. I get a heart shape sweat stain on my shirt. This is proof enough for me that this is what I was meant to do.
:)

So according to my training schedule, I have 22 miles of training left before marathon day. 8 miles being my longest run. Can't believe it's less than 2 weeks away!! Am I ready? I think so. I'm I nervous? You betcha! I get butterflies every time I think about it.

Another busy work week for me. I'm glad that it's taper time!!

Hope everyone is having a great week!!

The Worcester Marathon is held by a company called USRA. The recently sent an email requesting people to email them their story as to why you are running Worcester. Every couple of days or so the send out selected stories via email to everyone on their email list. Last week I read a couple good stories and decided to send mine in for the heck of it.

Today, after my lunch time run, I had a few minutes to kill and was on Facebook for a bit. Within minutes, I got a few messages from some people from the running club telling me that they just read my story in an email from the USRA. I immediately checked my Gmail account and sure enough it was there. You don't win anything for this, but it's kinda cool that they used my story some people noticed it.

Here is a screenshot of the email: 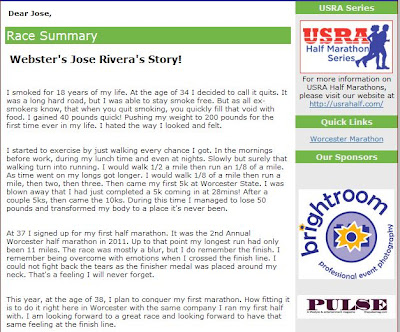 First off... Happy Mother's day to all you mothers out there.....
_
Second... Thanks to everyone's comments on my last post. I really appreciated it.
_

20 miles done.
What a mental feat that was. Honestly to date the toughest run I have done. I want to sit here and give a mile to mile recap of the run, but besides a couple key miles, I really dont remember much. It was almost an uneventful run. Here are those key miles: 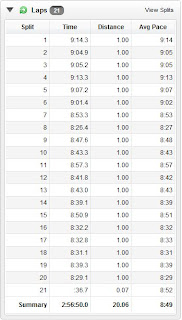 I was all over the place

I really hope they have enough Porta-John along the course on marathon day. There is nothing worse that the feeling of having to go pee while you are running. It's so distracting. As soon as I have to pee, that's all I can think of. If they dont,....  it's Worcester. I 'm sure I can find a store, restaurant or an alley that I can go in. I can't imagine they wouldn't have some along the course.
Note to self... lay off coffee marathon day.

The mental part of the run is definitely the hardest. I was trying to slow myself down the whole run. I kept feeling like I was running too fast. Especially in the beginning.
When I thought I was suppose to be at mile 19 of my run and I wasn't, it pissed me off! I was cursing mapmyrun.com. When I got home and looked at the run I had mapped out, it was then when I realized I forgot to go down a street I had mapped. Oh well. I made up for it and made sure I finished my run as planned.
My knees are achy. I've been acing them all day. The stairs at work tomorrow are going to be a pain. I'm just glad this is the longest run of my training until marathon day. 12 next weekend and 8 the weekend after that. I'm happily looking forward to them.

Have a great week everyone!!! 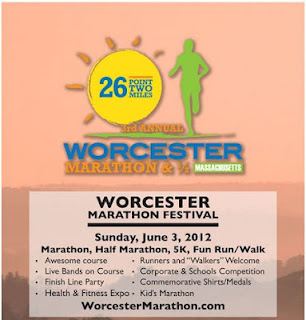 Jamoosh over at Last Mile Lounge posted something today that kinda hit home with me. With my first marathon being less than a month away, I have been secretly thinking about what time I will finish it in. I know that being my first marathon, I should really concern myself with just finishing the damn thing.  But like he mentions in his post, I can't stop thinking to myself what my time I will come in at.

I really do not know what to expect. As of this post, marathon day is 23 days away. Makes me want to throw up just thinking about it. I plan on taking Jamoosh's advise and pace myself and just finish it. But I just can't get the time out of my head right now. I'm hoping this weekend's 20 miler will give me the wake up call that I need.

This weekend's long run was an easy 12 miles. So I thought. I dont know why, but all last week I kept telling myself that I only had to run 12 miles this weekend. Only... I said it like it like I was only running a mile. I think the thought here was since I ran 19 miles last weekend that 12 would be cake. What's wrong with me? I did not respect the running gods on this run.....

I normally do my runs first thing in the morning on the weekend but I was busy and didn't get around to it 'til about 2pm. So off I went on my easy 12.... Not even going to go in to details. But it wasn't a pretty run. I just never felt like I got into a groove. It was tough right from the start. I ended up only doing 11.5 and that was because I was close to home and I really didn't feel like running out another quarter mile past my house to run it back. I said "F" it and called it a day. 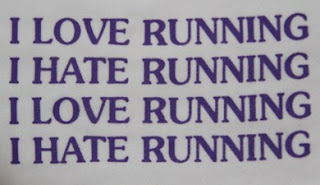 This was running through my mind during this run

Today I volunteered at the Foley 5K in Worcester, Ma. It was the Worcester Educational Development Foundation first 5K ever and there were about 200 runners\walker. It was put together to promote fitness in the community. There were many running their first 5k today. It was awesome cheering them on.
My job was to start the clock at the 2 mile mark and then cheer the runners as they ran by. I wasn't alone. I had a handful of college kids (that didn't want their pictures taken) that help with the cheering and got the runners going. 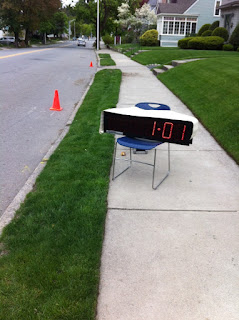 I know. It looks cheesy just sitting there on a chair. But I did the best with what they gave me.

I dont know about you guys, but I always thought that all the timers along a race course where somehow magically synced with the finish line timer. If not magically, at the very least they were synced by some long range WiFi or some like that. I was way off.... What it really is, is a handful of people at the starting line on their cell phones with the people out on the course telling them "Start it......NOW!!" ... Kinda bummed. It's like finding out Santa is not real. I really like my magic theory.

After it was said and done (or run). I drove back to the starting line just in time to see the awards ceremony and to help out with the clean up. I'm always surprised at how much it takes to put a race together. There is soo much behinds the scenes you never see when you are running the race. It was a very well organized race. Everybody involved did an awesome job!

I'll be traveling Wed-Fri to NYC. I'm hoping to get some runs in Central Park again.
Then I have to mentally prepare myself for my 20 miler next weekend.