Week 10 of marathon training. As mileage starts to build, here comes the IT band issues once again. 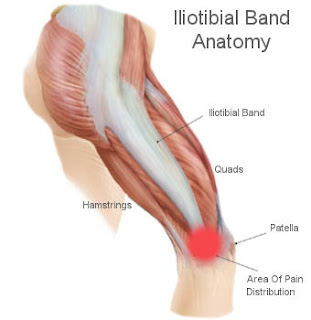 That is exactly where my pain and discomfort is!!!


As some of you might remember I had real bad issues with my IT band during my Boston Marathon training. At the time I didn't realize it was my IT band because most of my pain and discomfort was in my knees. It wasn't until I went to go see a specialist, and after some X-Rays and CT scans, did I learn that it was the IT bands. I got a cortisone shot and was sent to a couple of weeks of PT.

Any other marathon or race and I probably would have not run it. But being that it was Boston, I was determined to crawl across the finish line if I had to! Ha!,... so along with PT, readjustment of my training schedule, and support from friends and family I was able to participate in the most memorable marathon in history.

This time around, my training schedule is a bit more aggressive than my last. I'm doing more miles during the week and weekend long runs creep on me a lot sooner during this training. I planned on sticking to it as much as I can, but I already had to detour just a bit due to aching IT issues. This was last weeks schedule versus what I did:


So as you can see, not really to plan, but I'm still getting my mileage in. I've been foam rolling and stretching the crap out of my IT bands. I also have a list of strengthening exercises I got from PT. Been doing these religiously every night and morning.... well a lot more now than I have the past couple of weeks. They are feeling better but not 100%

Clarence DeMar Marathon is about two months away and BayState Marathon is only three weeks after that one. Aggressive? Yes.... but I'm soo looking forward to these races! The plan is to train hard, but at the same time listen to my body and readjust if needed. I think things will work out well!!


That's it for now. Like last summer, my post are far and few. It's just to nice to be indoors on a computer :)

Enjoy the hot weather everyone!! Have a great week!!

I have blogged about it before, but I need to mention it again.... 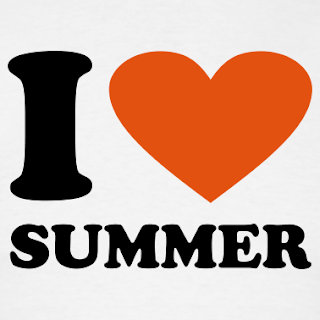 I LOVE the summer!! I love the heat, the humidity, the sun, I love everything about it! We are in currently in the middle of a six day heat wave here in the Northeast. Six days of 90+ degree hot and humid weather!.... and I'm loving it!

I have no issues running in this weather. Sure, it's a bit tougher, I agree. And you have to make sure to stay hydrated. That's very important. But I can run through this humidity like a fish swimming in water.

... My point is enjoy these days. We only get a few days of this. Winter will be here before you know it and then you can complain about how cold it is! HA!


Can't tell you how many times I get asked if I run in this weather. To which I always respond "The run's not going to run it self!"... and I always get the "You're nuts!" response :)

I'm Planning an 8 mile run tomorrow. Might do it first thing in the AM, if I wake up early enough. If not, it will have to be during lunch time at work.

Man, it has been a busy weekend for me!! Feels like I have been non-stop since Friday and it's finally starting to die down now. Just in time for Monday's madness!!

I'm in the middle of building a deck on my house: 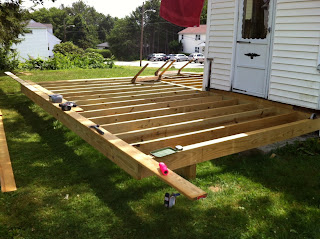 I've had some help with it, especially with the initial set up and framing. But for now, it's mostly me working on it and this hot weather is not helping!!! So that has been my main goal all weekend long. I'll have to post before and after pics when completed.

On Friday morning I ran my long run - 17 Miles before work (was suppose to do 16, but miscalculated). I don't think I'll ever do that again. Friday sucked!

On Saturday I ran a local 5k with the wife. We'll I did not run it "with" her. I took off as soon as the gun went off, and she ran it with her gym buddies. Here is my time: 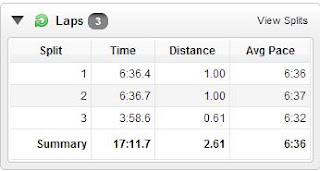 When I came across the finish line, I looked at the time and was confused. I looked down at my Garmin and sure enough, it was short. The race was labeled a "Fun Run", so I figured, Ok maybe it wasn't a real 5k? I mean I just followed the people in front of me. Just so happens at one spot on the course, there was suppose to be someone directing us down a certain street. That person showed up late!! So the first 30 or so runners all ran short and in turn got disqualified from the race!

I honestly felt like I was going to have a 5k PR. I felt good all the way through. I was even in front the first place woman, who I know very well from other local races and have NEVER been able to beat her. She is smoking fast!!! She caught up to me at one point and I told her that I was wondering when she was going to pass me. But I held strong and even gained a good lead on her!! Who knows what would have happened that last .5 of the race if we've run the correct course.

After my run, I ran back and met up with my wife, who actually ran the full 5k, and at this point had left her gym buddies behind! Way to go!!!! 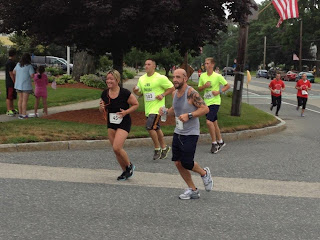 Our running club was doing the timing for this race and at one point I had to jump in and help out.
________

Sunday, was officially my first time acting as Race Coordinator for the Running club at a local 5k. The race was called "Run Like the Dickens 5K" and it was held at the very scenic Old Sturbridge Village. This was their first race ever, so as race coordinator you are basically helping them make this a successful event. This includes registration, timing and anything else they needed a hand with. I have helped out at many races before so I have a pretty good understanding of the behinds the scenes stuff that needs to go on. But more importantly, I had THE best crew of volunteers from our running club that came out to help. Even the VP of the club was there! Man did I get lucky!! I couldn't have hand pick a better group of volunteers.

At the end of the day, the runners were happy and the organizers of the race learned a lot from their first race and were extremely pleased with the work that our club did.

As my first time, I also learned a lot. It's an overwhelming responsibility. It can be nerve racking and stressful! But it was fun too. I met a lot of new people, saw a lot of familiar faces and I got to work with a great bunch of folks.

Then it was back to the deck as soon as I got home.... Marathon training has begun.... well, it actually began a while ago. I've been in training mode all along. But since I just singed up for my marathon(s) last week, officially it began then. I am following, or going to try to follow, Hal Higdon's Marathon Training - Intermediate 2. I say try because this is a lot more training runs than I did in my last marathons. I followed his Novice 2 plan last times. But scheduling these runs are going to be a bit trickier. Between crazy work hours and the home projects that I've planned out the next couple of weeks, it's going to be a bit hectic.

But I want to push myself a little bit more this time. My last 4 marathons finish times were: 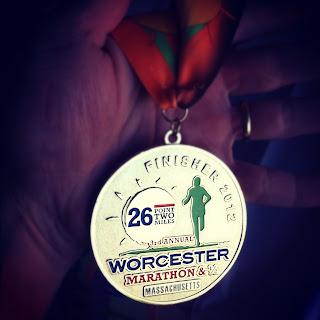 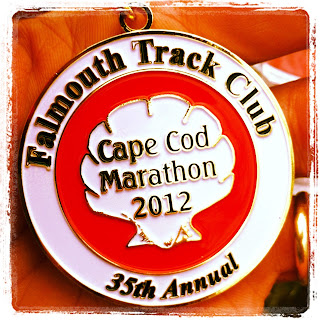 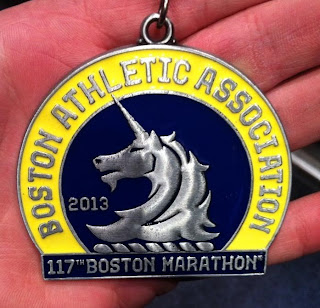 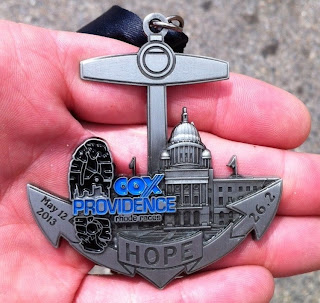 There is a lot of us in the blog world currently training for fall marathons which will be some helpful reading materials. It's always good to read how others are progressing. Even locally, especially in the running club, there are many also running fall marathons. Some even doing the ones that I'm doing. It's gonna be awesome feeding off their energy!

But like my last 4 marathon, I will be doing most of the training runs by myself. I might get some runs in with the club. They do offer group long runs on Sundays, but it's in Worcester, about a 25 min drive for me. But by the time I get ready and go out there, I could be done with a good part of my run if I were just to do it at home. 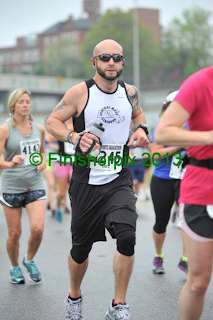 I know I am a slacker when it comes to signing up for races. I'm no Jeff when it comes to scheduling races. I usually sign up last minute or day of. Though I have been taking it kinda easy since after Boston. But my goal is to change this. This post is to tell you the races that I'm already signed up for. It's not much. It's a work in progress.... trust me, I'm sure there will be a lot of last minute races in between.

And here are the big ones:

Yep... not one, but two fall marathons.

After doing Providence Marathon just a couple weeks after Boston, I really dont see a big problem doing these two. Call me crazy, whatever..... I'll take it as a compliment. But I know others that are doing it, so I'm not alone. As long as can stay healthy, I should be OK. If I end up doing just one of them, I'll be OK with that too.


My plan is to finish off the second half of this year with a bang! Once that is done, I will set my goals on finishing Boston 2014. It seems so far away, but it will be here before you know it.

What do you think of my race schedule so far?