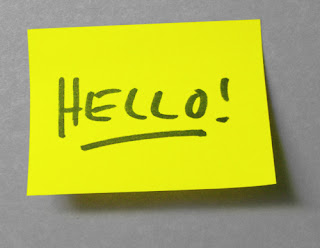 Because of summer and the awesome weather we've having, I have been blogging less frequently than in the past. I'm sure this will change once winter rolls upon us. For now, this is all I got.
-

Ever since after the Worcester Marathon, my legs just haven't been the same. They were achy for weeks and I just couldn't get into a groove when running. I was frustrated and was hating the runs. Granted, I probably should have rested them more than I did. But I'm hard headed and need to learn things the hard way. Lately though, my runs have been pretty good and I've started to get my groove back. I'm starting to fall in love with running again. I'm feeling like my old self again.

Yesterday, I decided that today, I was going to go for an 8 mile run. My longest run since marathon day. Last night I get a call from my brother in law, Jay, asking if I wanted to go mountain bike riding through some trails at Douglas State Forest with him and a couple other guys. I agreed to go, but only after my 8 miler.
So at 6:50 this morning I was out the door for my run. The run went well. A lot better than what I thought actually. Nice and smooth with no issues at all. I was back home around 8 and Jay was there to pick me up around 8:30. There were 3 of us and we meeting two more guys at the trails.

Mountain bike..... let's think about these two words for a second. Pretty self explanatory. A bike made for mountains. Right? I don't know why I have never thought of it that way. I say this because when I got invited to go mountain bike riding in trails, this comes to mind: 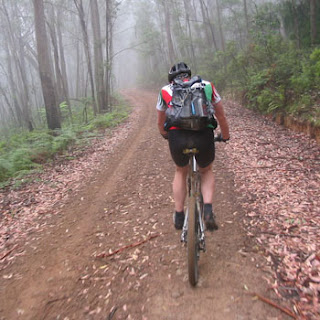 A nice easy ride through the woods.

Oh, don't get me wrong I did get some nice easy trails. But what I didn't know is these guys were going to veer off to some side trails that looked more like this: 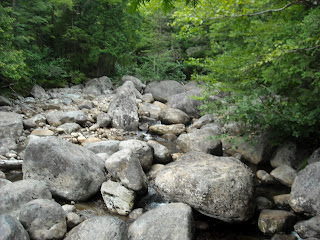 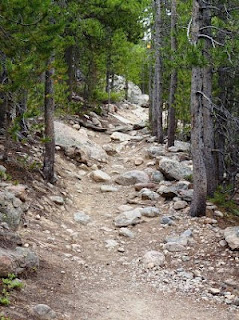 Of course these aren't actual pictures of the trails, but pretty damn close!!!

I struggled up hills and down hills I held on for dear life! 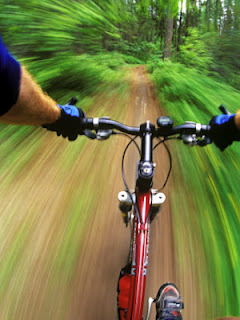 I even took a good one to the shin thanks to my bear claw pedals: 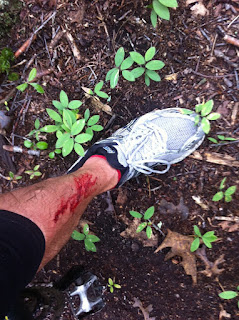 Almost 8 miles later, I couldn't thank the lucky stars enough that it was over and I still in one piece. I was tired and beat up. I'm sure running 8 miles before this did not help me one bit. I was ready for a nap.

It was like noon by the time I got home and after a shower and some rest I thought to myself, "That was fun!". It was honestly a great way to start the day. As hard as it was, I enjoyed it. I'll think I'll be meeting these guys again for another ride soon. But I think next time I just might do my runs on Saturday instead. :)

-
Speaking of Saturday..... next Saturday there is a 10 mile trail race in Oxford, Ma. that I'm debating of doing. If I do run it, I wont race it. I'll just do it as a way to keep upping my mileage.
_

Confession #1... I am a man that is always looking for a new challenge, that next big thing, that new "something". I need to have a goal to shoot for. I need that something to give me that drive I need to give it my all.

I never knew what this next something was until recently.

Don't get me wrong, I have many goals. Most of them are small, but important to me none the less. I plan on doing another marathon, but that's a given. After my last one, I wanted to sign up for another right away!! But my body told me otherwise. I can wait 'til next year. I'll be ready then.

Past couple of weeks I have read some awesome post by some of you bloggers recapping your tri experiences (Michael at Slowly Try-ing, Smacedo at A Runner's Ramblings, and even the beer loving Jamoosh at Last Mile Lounge). I loved reading about the emotions you guys go through during these races. I can almost put myself in your shoes and feel the excitement!! It gives me the chills.

My town plays host to at least 3 triathlons a year. Webster Lake Triathlon (men & women), Sherox (women only) and Daskin (women only). They usually consist of a .5 mile swim, 12 mile bike ride and a 5k run. Today I caught the ladies in the Danskin Triathlon series. It was awesome to watch these ladies give it their all! The crowd support was there for them too. These races are usually a big deal in this town.

So, it got me thinking... I think found my "something"!

Confession #2... I am a 38 year old man that never learned how to swim. I can doggy paddle and maybe do the breast stroke for a couple yards, but no real swimming here to literally, save my life. What to do now? This is where the next challenge comes in....


Webster Lake Triathlon is no 70.3. Thank the stars for this. All I have to do, is get by a half a mile swim. I have a year to learn how to swim and build up the strength and endurance. It's going to be crazy. But  I think, I believe that I can do it.

This will be my long term goal. I know that it seems way out there, but this is what I need. I need a goal to shoot for. I need something to keep me going.

Running with the Wolves 10k

This is the third year I have run this race. As I mentioned before, it's a 10k that is 5k down hill and then you turn around and do the second 5k UP hill. It was hot, humid and in the upper 80's at the start of the race. It rained like crazy an hour before race start, but it did nothing to help cool it off.

I have always done good running hills. That's probably why I really enjoy this race. My mentality is that if I can pace myself with everyone one around me down hill, there is no way they can pace me or pass me up hill. It's like a little game in my mind as I race. Now I'm not going to lie and say that it was an easy race. Oh hell no.... as I mentioned, it was hot and humid. It felt like I was running with someone on my shoulders throughout the whole race. And my body felt like it had Glide rubbed all over from the sweat. I was soaking wet.... and probably stinky too.... :)

My race went as planned. On the way back up I had a great lead on the people behind me and I ended up passing 5 people on my way to the finish line. The best thing about this race is that you also become a spectator. The race is out and back. So you see the people ahead of you as the pass by you on their back and then you see the people behind you as you yourself head back. So there is a lot of cheering going on as people pass each other by. It's cool.

They also offer free pictures that you can download afterwards.... you only pay if you want prints. Not too many races offer this freebie. 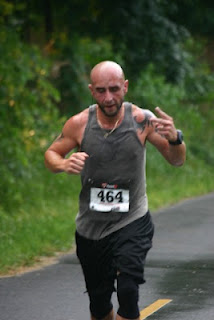 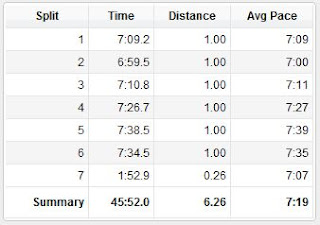 Look at the 2nd mile pace!!! Wow!!
As you can see, the second half was a bit slower than the first half, but consistent.

This is the farthest I've ran since marathon day. Today my legs are sore but nothing out of the ordinary. No pain which is great. Rest day today and then back at it again tomorrow. I almost feel back to my ol' running self again.

Have a great weekend everyone!!!

Today marks one year that I have been blogging. Who knew that this would lead to "meeting" great people online that share the same passion that I do for running. And that a year later I would have run my first marathon! 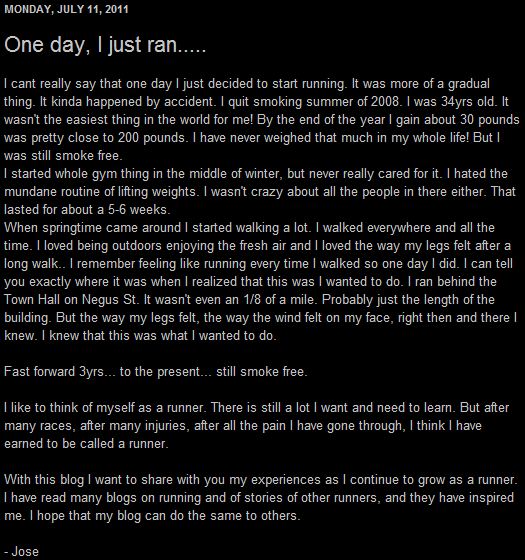 It's been an awesome year! I hope for many more.... Thanks for joining me in journey and for inspiring me!!
Posted by Jose at 10:33 PM 4 comments:

Slacking in the blogging dept....

It's summer. What can I say? I've been spending more time outside and less time on the computer.Besides the race last week on the 4th.Which I did OK (4.9 miles-36min20sec). I haven't really run much. Been resting my legs. But I have been doing a lot of bike riding. So much more that I think I found my second passion. 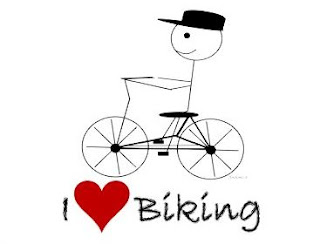 I do plan on running a couple miles this weekend to get my legs warmed up for next Wednesday's Running of the Wolves.

This is a 10k that I've done the past two years. It's a 6:30pm race that's only 5mins away from work. The best part about this race is that I like is that the first 5k is down hill, then you turn around and do the second 5k up hill. I do good on hills. So as long as I pace people around me the first half, I'm smoking them the second half!!

That's it for now. I'll blog more when I get around to it.

If you haven't done so yet, follow me on my Facebook page. I tend to post more there "on the go" since it's more convenient to do so via my iPhone. Also, if you have a running related Facebook page, please let me know. I will follow you as well.

Now get out there and enjoy summer!!!

I have plenty of funk to pass around.

Marathon is done..... again I ask "What now?"... I've been nursing my achy legs since then and haven't really put in any long runs or any good runs for that matter. The thought of another marathon this year has been thrown out the window. Just not feeling it lately.

I need to get out of this funk!!

So, just now, I've decided that I'm going to run a 5 mile race this July 4th. The Leonide J. Lemire 63th annual Road Race. This is said to be the second longest consecutively run race in the country (Boston being number one). Not sure how true that is, but none the less, I will run it.

Hopefully this will light that fire back in me. Cause, boy, I need it.