The night before the marathon sucked. I went to bed around 10 but ended up falling asleep around midnight. My mind was already running the marathon. LOL ... at about 2am I woke up and had a hard time going back to sleep. Next thing I know, the alarm clock is ringing. It's 5am. Coffee, muffin, bathroom, some last minute internet surfing and out the door by 5:45.

The weather was perfect. Sunny and the temperatures was about mid-50's.

Worcester (pronounced Woosta in these parts) is only 15mins away. I parked in the parking garage, grabbed my stuff and made my way towards the Porta-Jons... The pre-marathon nerves were already kicking in. By the time I got there, I saw that there were only 5 Porta-Jons and there was already a line of at least 40 or more in front of them. As I waited in line, the line behind me got even longer. It was 6:40 by the time I got into the Porta-Jon. There was no way the people still in line would make it to the starting line on time.

My warm up run was my run towards the starting line. There I met up with a coworker who was running the half. We chatted for a bit and waited for the start. He took this picture of me: 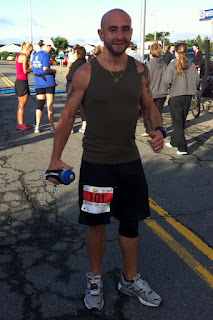 I look scared in this picture... or awkwardly nervous.


The start was delayed by like 10 mins because they were waiting on people that were still at the Porta-Jons. I can't believe they only had 5 of them! People were still making their way towards the starting line when the count down began and gun went off!! I felt bad for them. The race was chip timed, but still sucks to start a bit later than everyone else.

The gun went off and off I went! This is where I made rookie mistake #1... I started way too fast. I got caught up in the moment and was running with the crowd that was made up of mostly half marathoners. I knew it. I kept telling myself to slow down, but it was tough.

By mile 2, the shirt came off. I wrapped it around my Clean Bottle. Which by the way is the perfect water bottle me (Thanks Detroit Runner for the review!!). Somewhere between mile 3 and 4, I lost my shirt. Didn't even notice it fall off. :(

At about mile 5 we came to a split in the road where the people running the half went towards the left, while the people doing the full went right. It got lonely pretty quick. I went from having 30 people around me to having one guy about 30 ft ahead of me and about 2 people 20ft behind me. At mile 6 we entered the town of Holden and we ran Holden for the next 11 miles. Holden is a beautiful back road town with lots of farm land, lakes, rivers and dams. Honestly one of the most scenic runs I have ever done. The back roads made it easy for quick bathroom runs. hehehe.

The next mile marker I saw or remember seeing was mile 10. I was still feeling strong. But still moving way too fast. But I felt good. I was passing a few, a few were passing me. Rookie mistake #2. I kept trying to pass people at times I probably shouldn't have. I should have just paced them instead of trying to pass them.

At mile 12 we came up on the center Holden. The crowd support there was awesome!!! People were hi fiving me as I ran by, kids were holding signs, people were clapping and cheering. What a moral boost that was!!!! I was fist pumping and whooin' my way through the center of Holden. It was awesome!

But then we turned off into another back road and reality started to set back in. Mile 13 and it was quiet. There were no crowds here. We had done plenty of hills up to this point, but the hills around mile 13 and 14 really killed. They were short, but steep. There was no way of really "running" them. You just kinda chugged your way up them.

Miles 15 -18 are a blur. I was still feeling pretty good though. Ran with the same 2-3 runners for the last 6 miles which really helped keep my pace. At mile 18, we were back in Worcester. No more country roads. We were back in the city. Some lady had passed me and I kept watching her. She would do this thing were she would be way ahead of me, then she would start walking. I would almost catch, but then she would start running again. She did this for the next 4 miles and I would never catch up to her.

Mile 20. Past this point was uncharted territory for me. My longest run to date had only been 20 miles. And it's at this point where I started to notice a slow down in my pace. At this point we had made our way back into the same ending stretch of the race as the half marathoners. I knew this area and I knew what was ahead of me.

Mile 22.  I came up to a water stop. This is were I made (I think) rookie mistake #3. I stopped running and started walking towards it. I really wouldn't call it walking though... it was more like wobbling. My legs weren't feeling right. I took a sip of water, splashed the rest over my head and tried to take off again. My legs weren't having it. So I walked some more. Rookie mistake #4 - I stopped my Garmin every time I walked. Force of habit I guess.

Miles 24-25-26 were the toughest 3 miles I have ever done in my life. My legs were cramping and I couldn't run more than quarter of a mile. I had officially hit the wall! But with my wife on the phone with me and my kids cheering me on in the back ground, those were the best 3 miles of my life. I wasn't running with my legs at that point. I was running with my heart.

There was a lot of running and walking towards the end, but I made sure that when I came around the corner towards the finish line I was coming in running! The wife and kids cheered me on!!! 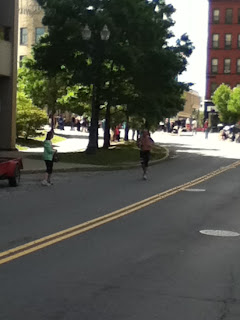 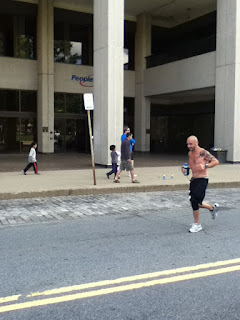 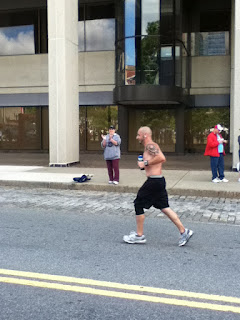 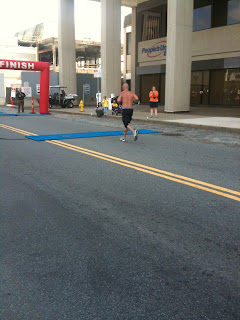 I couldn't believe my eyes when I saw that I was under 4hrs. It brought me to tears.

As soon as I crossed the finish line I grabbed a hold of the table where the medals were just to hold myself up. The guy placed the medal around my neck and my wife had to help me walk away. 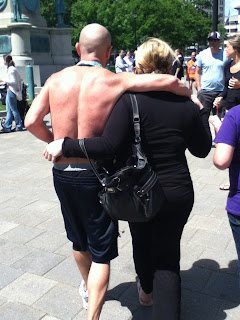 I was hurting. I was was no Jim heal kicking in the air. 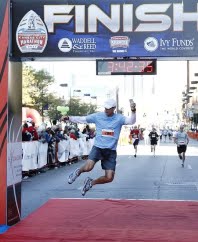 I needed water and I needed to lay down. My legs were cramping up something fierce! I looked more like this: 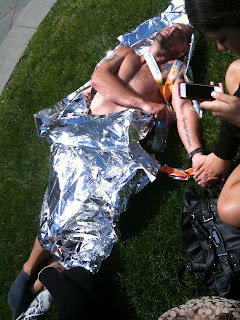 It took m a while to even crack a smile: 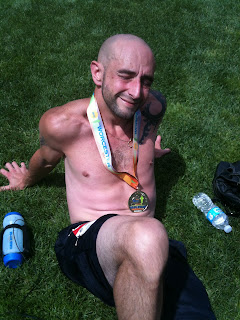 But I had finished. I had completed my first marathon. Who would have ever thought, that this former smoker of 18yrs would run a marathon? No one, not even I....

The final time is not correct because I stopped my Garmin a few times.

Happy doesn't come close to what I'm feeling!!!!! I made some mistakes, but I hope to only learn from them. I'm looking forward to another one in my near future.

Thank you to all you bloggers\runners out there for your support. Thank you for taking time to read my post and for following me through this journey. And stay turned.... I'm not done yet!!!!

(no time to proof read this post.... it's way to late. sorry for any mistakes)

Damn! I had to read the last bit of your post through tears. Your wife IS awesome. And I kind of suspect that she thinks that you are too. Great report!!

Congratulations!!!! Congratulations!! So excited for you! Your first marathon and a 3rd place finish to boot! Amazing! You totally had me in tears too. So cool that your wife stayed on the phone with you for those last few miles. Sounds like you guys are pretty in tune with each other...she knew you needed her! Great post!

I haven't read many blogs lately, I've been so busy at work ... but ran into this one this morning. And I'm glad I did ... CONGRATS MAN!!! That's so awesome!!! You did a great job and that is an awesome achievement! of course you made a few mistakes along the way, we all do, heck - I still do - but you were great. The story about you talking with your wife the last few miles is one of the best I've heard - really awesome. And you're right, there's no better feeling than when you see your family waiting for you at the end. Congrats again bro - great job, and now, you'll always be a marathoner!!!

Can't believe it took me so long to get over here and read your recap! Congratulations!! I'm really excited for you! And your wife staying on the phone with you - that should have come with a kleenex warning :)

You are a marathoner!!

You ran such an AMAZING race!! And I LOVE that your wife "ran" you in. Congratulations marathoner!!

Sorry I am SO late with this...catching up! That was a tough race, but you did it!!! Woohoo!!!!! You are a marathoner and I know you will do it again! Awesome perseverance when you were having such a tough time...that it badass!

She Is Out Running said...

Love this race report too! Very emotional end with your wife and kids!