Yesterday I completed my 6th Marathon. BayState Marathon in Lowell, Ma. This for me is my 5th marathon in a years time. 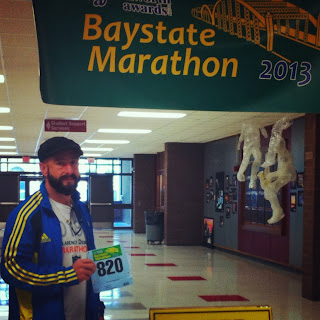 Have no clue what those floating bodies were about :)

I had picked up my bib the day before, but still arrived early because I was told by others that ran before that traffic can get pretty bad. Waiting area was at Lowell High School so I set up camp at a table in the cafeteria. As I was getting ready, there was another guy across from me at the table doing the same. At the same time we both noticed that we were both wearing CMS club shirt. Then we realized that we are Facebook friends.. Ha! His name is Kevin and he is editor and publisher of a local online running magazine called Level Renner. It has some good articles and great local runner profiles. *cough* profile me next!*cough*... it was great to run into him there.

Weeks before this race I did a search for the hashtag #baystatemarathon on Instagram and found many people also running this marathon and started following them. They in turn started following me. I can't tell you how much of a great idea this was. We followed each other through training and I ended up meeting quite a few of them that morning ran with some during the race.

At the start, I found the 3:35 pacer and also 2 of the Instagram "friends" there as well. I was really planning on running the 3:35 pace, but I figured what the hell? If I get it great, and if I don't then whatever. So off we go.  The first eight miles were uneventful. Chatted with other runners about the Sox's big win over Detroit the night before that most of us did not see because we all went to bed early. Ha! 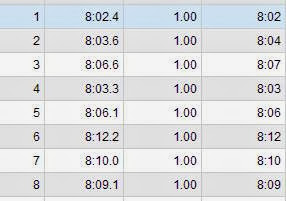 Uneventful, but a bit too fast.

Not to long after, a few us started to fall behind the 3:35 pace group. He seemed like he was going way too fast. By mile 10 or so, there were 4 of us still running together from the 3:35 group. I was still felling good though.

BayState is a double loop marathon. See here for the course map. So at mile 12 we cut across a mile long bridge and meet back up around the original 3 mile mark.  Mentally it's tough, but we still moving along. 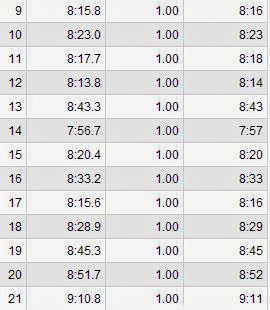 About mile 15 out of the four that were still running together, two started to fall behind. I started to run ahead with one of the ladies from the group. Her name was Nicole. We chatted for a while, but then she put on her head phones. Oh, that's another thing. Though I had my iPhone and headphones with me, I had not listen to it yet. Conversations throughout the race was keeping me occupied. At about mile 19 or so, Nicole took off her headphones and told me she was getting tired needed to talk to get her mind of running. So I just started to ask her questions,... what do you do for a living? any kids? what's your husband do for work?.... she was doing good until mile 21 where she got a leg cramp and had to stop. I felt bad, waited a sec but she told me to go on ahead.

So here I was. Me and the last 5 miles. I slowed down a bit, but I was still feeling good. About mile 23 I decided to put my music on for a while. Everything was going good until mile 26.  As you can see below, I abruptly slowed down. I got the worst back pain!! Bad enough that it made me stop. It was hard to breathe. I walked for a bit, til I caught my breath. Ran for it bit, then walked again. Every time I walked my back ache even more. 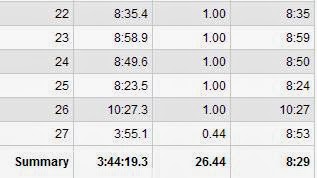 This last mile was hard. I remember thinking to myself  "Where the hell is the finish line?!" ... I didn't even want to look at my Garmin to see far I was from the end. But I heard the beep telling me that all I had left was the .2 to go. Longest .2 ever! But I picked up pace just to get it done. And there is was! I heard the announcer call my name as I crossed the finish line and I have never been so happy! 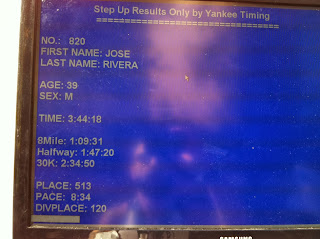 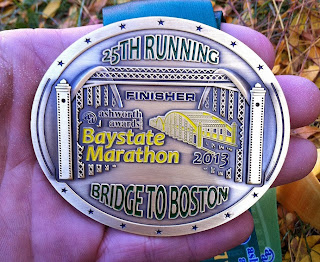 Grabbed my medal and a water and found a spot on the grass to lay down for a bit to rest my back. I must have looked bad because the paramedics even came over to check on me. Ha! I rested for a while then grabbed some food they were giving out. I felt better after that.


I drove the hour home and I was beat. I had a few beers with dinner and I was out like a light. Did I mention I was tired? My back still hurt too. Oh yeah.... it's break time for me. Feels like I have been in training mode for a long time. The way I see it, I have at least two months before I start training for Boston again. I'm relaxing the next two months!

-
One thing that I learned from this race is that my last marathon and PR was not a fluke. This is real. I am getting faster and stronger. Though not a PR this time, I am extremely happy with the time!

Well that's it for now. I'm still achy but feeling good. Thank you all for reading.

Have a great week!

Great job! No sir, you're PR was NOT a fluke. You're a great runner and this is a very solid time. Nice work! Get some well deserved rest.

Awesome job so close to your last race!! You did an amazing job! Hope your back is feeling better and the pain was just temporary strain. Get some much needed and deserved rest now!

Incredible Job Jose! Another solid result for the marathon. You certainly deserve the rest with all those marathons this year!

Awesome job!! Enjoy some well deserved rest and hopefully your back will be feeling better soon!

it's all about pace said...

well run. Thanks for the report

Good show. Can you explain why your hand was purple? Maybe the paramedics were on to something.

Congratulations on the great race. Yes, you are getting stronger and faster but it's definitely time for some rest. You've had a huge running year - your body will thank you for it.

Nice race Jose! You are strong (Boston Strong?) and will be great in Boston again. For now, get rest and later, get ready!

Awesome! You earned that PR and I am so happy for you!

Nope, not a fluke at all! You have become SOLID in going the long distance! But, yeah, you need a rest! 5 in a year! Time for some easy, relaxing, middle distance runs :)

Well done, my friend! Hope that back feels better soon.