First, I would like to thank my wife for supporting me and putting up with my crazy passion. When Providence offered up free entries to people who did not finish Boston, my wife insisted that I do it. I couldn't imagine running another marathon just weeks after Boston. But when the shadow of doubt loomed over me,  she stood by me and believed in me.
- 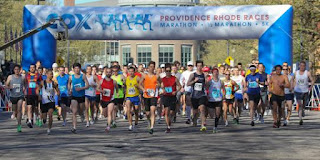 Race day. For me it was a typical race day. I wake up early, eat breakfast, check and double check my stuff and off I go. Alone. This is how every race, outside of a marathon, usually go. My three previous marathons have been a family affair, a spectacle, an event. But not this time. This to me was a regular race. Nothing big. Just one more for the books.

I got there early and headed straight for the porta potties. I wouldn't normally make a big deal out of this, but this was the first time that I used an unused porta potty! It was like striking gold! It had that fresh new porta potty smell. Only those who have experienced it know what I'm talking about. Ahh...... LOL

I pinned my Providence bib in the front of my shirt, but in the back I pinned my Boston bib. Someone on Instagram gave me that idea. I thought it would be a cool thing to do.

As I mentioned before, I was suppose to run with a couple club members, Jenn and Joanna. I walked around before the start of the race, but couldn't find them. I could have called them. I had my phone with me, but it was in my waist pocket along with some granola bars and I didn't feel like fighting with it. It was tough getting it all in there in the first place. So I looked around with no luck and then decided to line up at the start. I placed myself at the 9min mile spot.

At 7:30 - Star Spangled Banner was sung and the race was on.

The course itself was great. Mostly flat with only 2 or 3 hills. And it was a fast course too. I remember coming up on mile 11 and thinking "wow, can't believe I'm here already". I felt good throughout the race. I ran pretty much with the same 10-12 people almost all race long.

At mile 18, I remember feeling a bit tired & hungry, but I chowed down two granola bars and felt good after.

At about mile 23, I run by a couple with their kid sitting on a wall and I hear the mom yell out "Go Jose!!". Confused for a sec, I thought my mind was still messing with me. I didn't know these people. Then I realized that this had to be fellow blogger Smacedo from A Runner's Ramblings. She also happens to be Jenn's sister-in-law (the person who I was suppose to run with). Small world huh?... So I gave a "woohoo" and a fist pump and kept on chugging. That was truly a nice surprise. Thank you!

Mile 24, I was beat. I wanted to jump into the Seekonk River and call it quits....When I approached the mile 25 mile marker, the time clock there read 3:45. I knew that if I pushed it I could still make it under 4hrs.
Half mile away from the finish, I could here sirens off in the distance. The presence of the police was noticeable throughout the race, but with the siren going off, I started to look at police officers faces on the side lines. I was trying to read their expressions. Was something going on? Were they going to tell us to stop? Thoughts and feelings of Boston started to come back to me. But no. Nothing was going on. It was only me.

When I saw the 26 mile marker, I really kicked it up a notch and went all out. I flew by the few people that were in front of me. I was never soo happy to see a finish line! I crossed it with a relief of just being done. It really didn't feel any special than my other finishes. It was just another race and another medal. 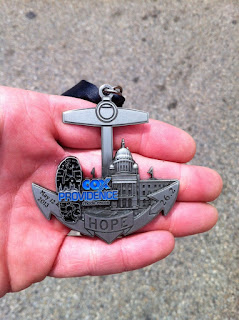 But a nice medal!

My pace was pretty consistent. You see can at mile 22 were I was getting tired.

Finished at almost the exact same time as my first marathon.

I came into this not knowing what to expect. I kept saying that this was just a regular race and I meant it.  It was a free race and I was in a mindset that if I finished it I would be happy and if I didn't, I would have been ok with it too. Overall it was not a bad race. I'm pretty happy with my pace and feel throughout the run. I didn't run any better than my last marathons, but I also didn't run any worse. So it's a win win.

I only took a couple of pictures. Nothing really worth posting here. It was Mother's Day after all. As soon as my legs felt better, I was back in my car and on my way home.

What's next for me? I'm not sure. I was never good at planning out my race schedule for the year like some people. I wish I could. I just wing it and do whatever race feels right or looks interesting. I'm sure something will come up soon.

Well that's all for now. I hope everyone has a great week.... "til my next adventure!

What can I say, I'm a planner! Congrats on another marathon and at sub 4 so close to Boston. Great medal. Incredible wife letting you do this needed marathon on Mother's Day.