So I tried to get the wife to do a guest post, but she wasn't having it.  So we will save it for another time and another race ;) 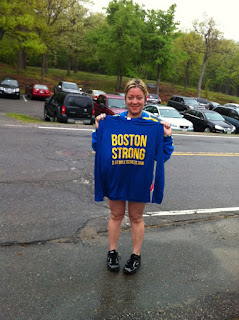 Boston Strong 2.62 Benefit Run that we went to was one of a few that were held in the state on Saturday May 11th. We did the one in Worcester. It was cool morning and it looked like it was going to down pour any minute. Luckily the rain held off. I brought my Garmin for her to use, but when I went to power it up, I realized I hadn't charged it. Oops... 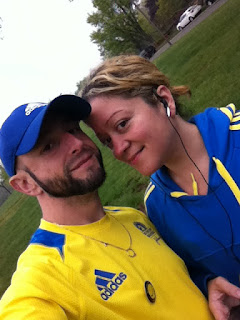 A quick happy picture, before I tell her about the Garmin

Our warms up consisted of a quick sprint to the bathrooms. That sprint took all of 30 seconds. Followed up by my wife doing the MC Hammer typewriter while we waited for the race to start.

I almost caught her with my camera, but unfortunately wasn't fast enough.

Warm ups done and it was off to the starting line. Star spangled banner was played on an iPod connected to a big speaker and then we were off. We ran together, but she was listening to her iPod and wasn't about to have a conversation with me. I did say a couple of things to her, but she ignored me. She was focused on the run. So I would run up way ahead and wait with my camera. 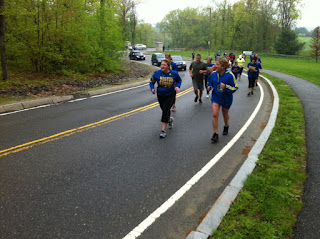 Look at her sizing down the competition!
You go babe! Show her what's up!!

This run was hilly. Half a mile up hill to start, with a couple ups and downs in between, then a down hill for another half mile.. Then you turned around at the bottom of the hill and went back up. She kept her pace pretty good. For someone that doesn't run, she was running strong! She conquered those hills. The last half mile she really picked up her pace. I was surprised. I too had to pick it up so I could take some pictures of her at the finish line. 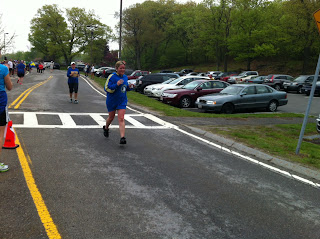 Here she is finishing strong!!!
I actual finish I recorded it for her, so I wont post it.

I am damn proud of her! She really gave her all out there! I'm hoping that running becomes something she likes. Even just a little. It was fun being out at a race with her.

Good on her for making you have to run fast at the end.

That is AWEOME! Congrats to your wife!

Awesome! Big congrats to your wife :)