The Boston Marathon - My Official Recap Part 2 - The Race

Being that I was running The Boston Marathon, I actually slept well the night before. Usually I toss and turn worrying about waking up late and end up sleeping like 2hrs. But that night, I slept good. Had coffee and cereal for breakfast and took care of my pre-race bathroom duties. I had packed all my stuff the night before so it was just a matter of waking up my daughter and having her drop me off in Worcester, where the bus to Hopkinton was waiting. 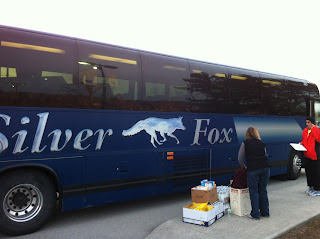 Besides the chatting and joking on the bus, he ride to Hopkinton was uneventful. It's one I do almost everyday because I work one town over. I didn't start to get real until we were approaching the middle school. 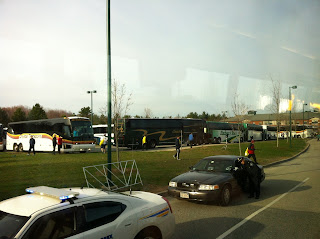 TONS of other buses and people 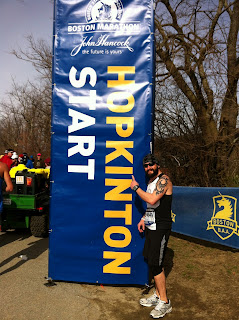 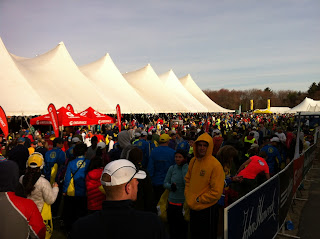 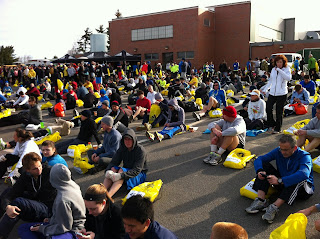 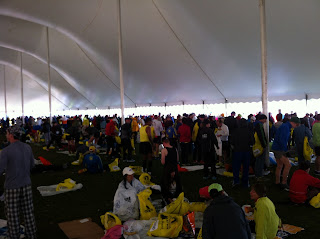 These are just a few pictures of many that I took 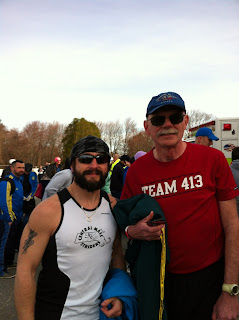 My good friend Joe. I put in many volunteer hours for him.
I owe him for helping get a Boston number!
-- 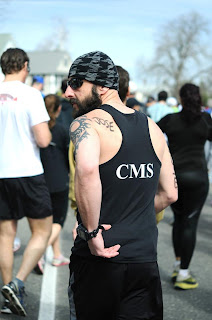 Me headed towards the start

The start was crazy.... I've never seen soo many people at a race. It was an incredible site 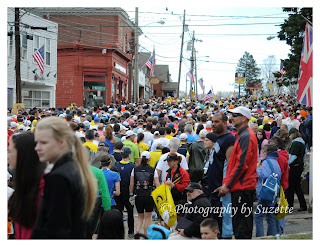 Picture borrowed from my sister-in-law...

I was suppose to be in corral 9 of wave 3, but I ended up sneaking into corral 5 because I wanted to run with another club member that was in that corral. They were checking bid numbers as you entered the corrals so I had to be sneaky and got in, but by then I lost that club member in the crowd :( ... within minutes the race was on!!!! It was a slow start. By the time I crossed the start line I was at a slight jog. Which I was OK with. I knew that I wasn't going to break any records with this race. I was here for the pain and enjoyment of what is Boston.

The first few miles were bathroom stops for many people. No matter where you looked, left or right, men and women, were doing their business in the woods, in plain site. Nothing we haven't seen before right?
Though I ran this part of the course before, the streets still looked all new to me. About mile three there was a biker bar where everybody was outside drinking. 11am and already drunk off their asses.... awesome!
Mile 6.5, in Framingham, I see my first supporters on the course. A coworker and her family cheering me on. It was awesome!!! By mile 10 in Natick, hunger was starting to kick in. Down went one of the granola bars I had packed. The half marathon point in Wellesley was a sigh of relief. I was tired by that point, but now I can start counting down the miles left...At mile 15 I unexpectedly see my friend Teddy on the side lines. He snaps this picture: 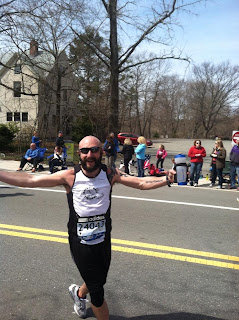 I take the right onto Commonwealth Ave in Newton and I start looking for my parents. They had told me that weekend that they would be there...... no sign of them. Did I miss them? I was heartbroken. Did they really not show up? Not too long after I see my buddy Bill. Never had I been so happy to see a familiar face. Bill, I said it already but it needs to be said again.... Thank you for being there!!

And here comes heartbreak..... I didn't attack it like I did during the rehearsal run. I wanted to conserve my energy for those last few miles. I just put my head down and chugged away. There I also ran into my brother-in-law and his family. He ran with me for a good 300 feet..... the joke after was that he never hurt so much in his life! Ha!

Boston College was insane!! Those kids really know how to pump those runners up. They make you forget that you just ran 21 miles and still need 5+ more to go. Those last 5 miles seemed to take forever. I wouldn't look at my Garmin, but I kept looking up for the mile markers. Kept tellin myself, come on 4 more, ... ok now 5k left..... 2 miles to go....
About mile 24, my left leg cramped up bad. It almost made me fall. So I decided to walk it off a bit. After a couple minutes I kicked it back into gear. I remember seeing the mile 25 marker..... then not to long after the "One mile to go" sign.... Tears rolled down my face. I was almost there!!! From out of nowhere I got a burst of energy and picked up my pace. I was passing people left and right..... the tears kept on falling.

I see people turning up ahead. There it is.... "right onto Hereford then left on to Boylston, I'm almost there!" I kept telling myself....

There is no doubt that I will return next year. NO doubt at all. Whether it's through volunteering again, through charity or if the BAA gives us a deferral. I will return. This is my city. I grew up in Jamaica Plains and in Roxbury. I walked the street of Boston without fear and I will run these streets without fear.


I have always been and I will always be - Boston Strong! 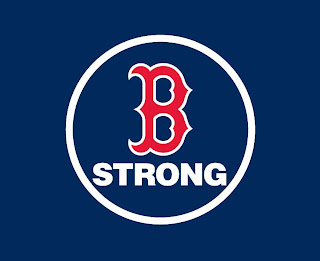 
I finally picked up my medal this past Monday... 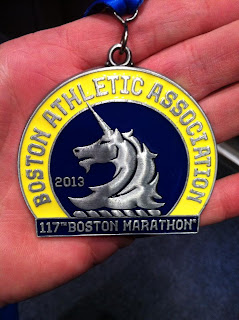 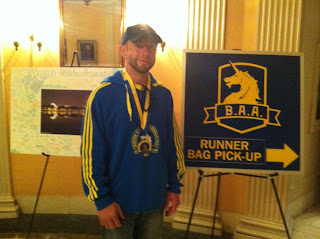 You're welcome, my friend....if I wasn't running it, I wanted to be there for a friend who was....and I was so glad you FOUND ME, because I didn't spot you until you spotted me!

Oh, BTW.....I think I'm speaking for a few people when I thank you for shaving! LOL Not that the beard didn't make you look BADASS....kinda just made you look scary! :>)

Boston strong. And then some. xoxo

Awesome man. Obviously it was a great/horrible experience all wrapped up in one. Sorry the beard's gone ... that thing was epic!

a lifetime experience to be sure. And you shaved...