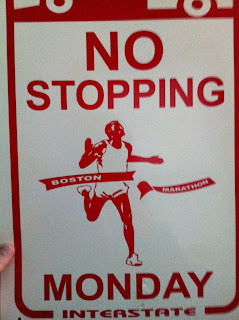 Today there was stopping....

The picture below shows how close my family was to today's blast. 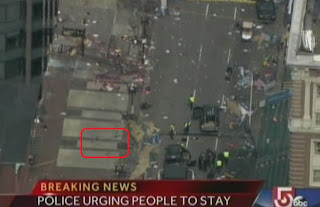 I was approaching Hereford St when I heard the bomb's go off. We (the runners) all looked at each other and said "what was that?"... it sounded like canon blast or something like that. When I hit Hereford St. I can see and and smell smoke.... smelt like sulfur. When I came up to Boyslton, the cops stopped us in our tracks. I knew right then and there that something bad had happened. The cops said that a bomb had gone off at the finish line.....

I started to cry.... I feared the worst.... I started to run down Boylston when the cops grabbed me and told me that they couldn't let me go down there. I ran towards the side fencing and jumped over it at started running down further. Still on the phone with my wife I was finally caught up with them on the corner of  Exeter St. and Newbury St.

My wife and kids were crying and telling me that there were bodies everywhere after the explosion. They told me the blast threw them off their seats. Then they told me that my parents, my sister and sister-in-law where there too but that they were missing.

My heart sank even more.... After about 15mins we were able to locate them and reunite.

The police forced everyone away from the blast zone.... so we just started walking back towards the course. Then I saw where they had stopped all the other runners . 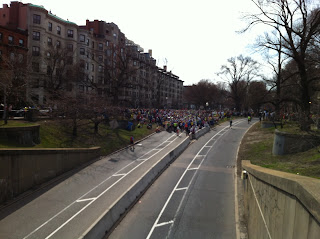 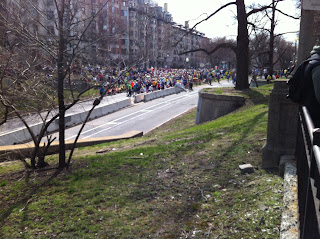 It was something unreal... Like out of a movie.

After about an hour the let them all go, but towards the buses, not the finish line.

This is a sad, sad day for Boston. I am so glad my family is safe, but I am so sad about all those that got hurt. It still feels so unreal.

This was suppose to be a day of celebration. I can't stop tears from falling and my heart from hurting. 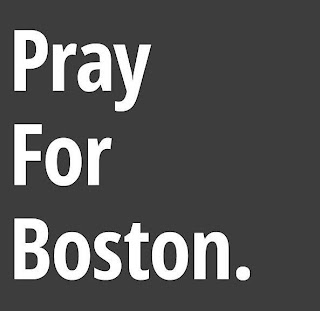 I am glad you and your family are OK. When my husband pointed out that the spectators were the brunt of the blast my heart fell even harder.

We're glad you're safe. A lot of people on B&P were worried about you because we knew you were running today.
Our thoughts and prayers are with Boston tonight.

We're glad you're safe. A lot of people on B&P were worried about you because we knew you were running today.
Our thoughts and prayers are with Boston tonight.

I'm so sorry. For you. For your family. For everyone involved. This made my heart stop reading it.

This is NOT how today was supposed to be.

Glad you and your family are safe. Much love and peace to you tonight...

words are hard to come by, and you and your family were right there...it was supposed to be a celebration, and I was so happy to have seen you on your way.....and then all this happened. I'm so glad you and your family are safe, and I look forward to being able to run with you again soon. Hugs and kisses from all of us to you and yours, Jose....be in touch, my friend!

I am so happy that you and the family are home safe.. I can't imagine how you and your family must feel seeing something like that.. Our hearts go out to the families of them who lost their lives ..May they R.I.P and god bless them

I was just so relieved to hear you & your family were ok! I was actually sitting at my computer wondering why I had a 40k split for you and no finish time when I heard & knew ou had to be close to the blast site. My heart aches for everyone. This is not what today was supposed to be like :(

Jose, I've been checking your blog for the last several hours hoping you'd be OK. It's a sad day indeed. The Boston Marathon is one of the greatest events in the world. I'm so glad you and your family are safe.

Glad you and your family are uninjured and hopefully you'll be OK soon. I thought about you and another local runner I know (Steph) who ran today as well. Was waiting for your tweet to see how you did - didn't expect this result at all. Very hard to comprehend...

Hate to say it, but thanks for posting this...we needed to hear you, our brother, was ok. Love you dearly.

So happy you and your family are safe!!

I am so glad you and your family are safe.

I am so glad too that u and ur family are ok. But I cannot stop tears...I can't believe what is happening.

I had goosebumps reading this. I'm just so glad that your family was safe but can't fathom how terrified you must have been. The friends I had running have all been accounted for so again I am grateful.

This was a monstrous act which will affect so many people for many years.

Man, I thought about you and your family all night. One of the first things I did when I heard the news was look up your time - I was hoping you were already done, but based on your half-marathon split, I knew you were probably close to the finish line. So glad your family is okay ad glad your safe too. I'm sure everyone is pretty shook up. We obviously have everyone else in our hearts and prayers.

Senseless. Absolutely senseless. Glad you and yours are all OK.

So happy you and your family are ok. So sad. I started crying just reading it.

I'm so relieved to see this post this morning. I've been thinking about and praying for you specifically as you were the only person left that I hadn't heard anything out of that I knew to be there. My tears are falling with yours, friend.

Thanking God you and your family are safe. And I am praying for and with you.