Last weekend I had and awesome run at Stu's 30k. I rocked those 18.6 miles through the streets of Clinton, Boylston & West Boylston Ma. It wasn't easy, but I got them done! I was on cloud nine most of the week.
This week, work was pretty busy so I only got in a 5 miler on Tuesday during lunch and a 4 miler on Thursday after work right at the start of a snow storm that we got Thurs & Friday that dumped about a foot of snow on us. The Thursday run wasn't planned, but I got in a new pair of sneaks via UPS from The Running Warehouse that night and I just HAD to try out!

When I returned from my snowy run I had this Facebook message posted on my wall:

Friday it snowed most of the day. I went to work that morning just to find out we were closed because of the storm. .... bastards! A phone call would have been nice! But being that I was already there and I had a key to get in, I went in and got a lot of work done without interruptions. It was a good day :)

Saturday, I wasn't feeling that great. Don't know what it was, but I wasn't feeling like going out for a run. Plus, I had left my Garmin at work so that just sucked right of the back. By the time I got all my errands done, it was already 1PM and a run was the last thing on my mind. But being that it was like 50 degrees out and the sun was shinning bright, I had to get out and do something. So I threw on my shorts and a long sleeve T-shirt and headed out the door. I figured if I got in at least 6 miles, I would have been happy. Of I went and I was feeling pretty damn good. This "OK with 6 miles" ended up to be an awesome unexpected 14.8 miles (according to Mapmyrun.com). I was felling great! I could have probably done more, but by this time I was by my house and called it quits. Perfect long run!!

Sunday, I woke up achy. My calves and knees were sore. I was like "c'mon! I was feeling great yesterday, whats going on?". I had to shake it off because I had to go volunteer at the Worcester Celtic 5k. I helped with packet pick ups and same registration. It was a crazy day. There were 3000 registered runners plus all those who registered that day. It was a lot of work.
Once the race started we moved up to the finish line to help hand out waters to the finishers. That was actually more fun. The look on the people's faces when they saw you holding a bottle of water as they crossed the finish line was priceless. We all know that feeling!

For my 4 hours of work I got a volunteer shirt: 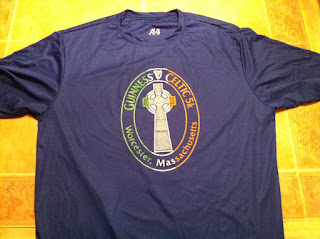 ....plus I got one of the runners shirts as a girt: 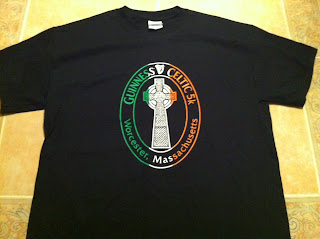 You can never have enough shirts!

It was a good day volunteering. I'm soo glad to be part of a great running club!!

Tonight, I'm still achy. I didn't run today and I probably will not run tomorrow. I need to rest these legs.

Next weekend I plan an at least 16 mile run. The weekend after that, the running club is holding a Boston rehearsal run that goes from Hopkinton Ma. to Boston College..... 21 miles. I want to be ready for that.

We'll see how it goes.

-
Have a great week everyone!!

I love it! A maybe 6 miles ends up doubling plus some. Usually when I'm feeling good I might go a couple of extra k - nowhere near what you did. That's a great run!

The running warehouse is my favorite shopping place! 6 turned into over double wow! nice job on that. Great job on volunteering! Love it! Boston here you go!