My adventure started Friday night when the wife told me her car was acting funny. After checking it out, I realized the alternator was dead on her car. So that meant she would need to drop me off in Worcester for the rehearsal run before 7am.
That night I couldn't sleep at all. I was up every hour thinking I was going to be late. It sucked big time! I finally gave up and got up at 4am. Our coffee maker died the day before so I had to run to Dunkin's for a coffee. Which was good because Dunkins coffee is like a laxative to me, and not to sound gross....but being "cleaned out" helped for this run.

The vans left Worcester at 7am to be at Hopkinton for 8am. Not too long after arriving at Hopkinton we started our run. 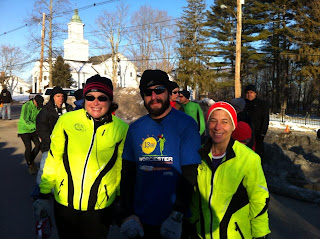 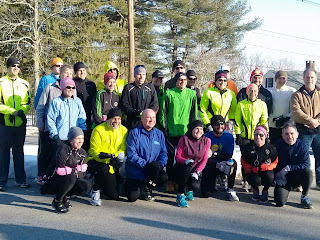 Here is all of us (picture borrowed from CMS facebook page)


I ran with a couple of club members for the first few miles which helped me control my pace. Otherwise I would have probably started way to fast. By mile 3 I was on my own. By mile six I caught up with other club members and ran with them for a while.


By mile nine, I was by myself again. It wasn't 'til mile 12 that I ran in to Bill (another club member) at a water stop and ran with him 'til mile 18, the bottom of Heart Break Hill.... He decided to take it slow at the hills. I on the other hand decided to take Heart Break head on! I have been there at this location many years as a spectator and watched it take out many runners. I was not going to let it do the same to me. I wanted to show Heart Break that it had nothing on me! I was going to conquer this legend..... and I did. I ran these last three miles faster than I did any of the last 18 miles. 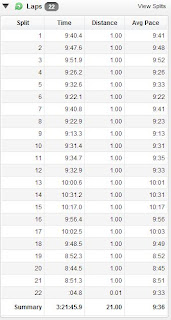 Miles 13 through 15 were through the town of Wellesley.... Lots of traffic and snow banks. Some tough running... 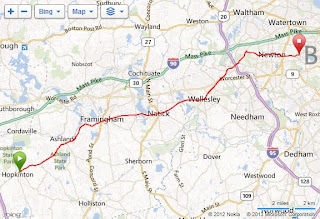 5 more miles to the finish line!


It was good course. Not going to say it was easy, cause it wasn't. It had its up and downs. My right knee was aching almost all the run, but more towards mile 17. Especially on the down hills. I stopped my Garmin exactly at mile 21. I was done. Not too far after that I met up with the buses bringing us back to Worcester.
-

This run was very well supported. Plenty of water stops, police detail and crowd support. Not only was our club out there, but many other running clubs as well. There were hundreds, maybe thousands of people out there on the course today. It felt like a full on race. Not at any time did I ever feel alone out there. It was THE best training run I ever did.

After this run I feel more confident about marathon day. I know what to expect. Heart Break Hill was not as bad as everyone says. I know I can take it on again. The key is finishing off those last 5 miles.

I got back to Worcester around 1pm where my wife was waiting. Being that we only had one car at the moment, I had to tag along as she did her shopping duties. My body was begging for a shower so I stayed in the car while she did her thing. Two hours later, we were finally home.

I welcome any feedback...... Hope you all have great weekend!!

You're definitely more than ready to conquer the run! All the best!

Excellent long run. The Running Gods are looking favorably upon you!

Nice run. Great that you finished so strong - it means you have fuel to finish!

I didn't know that there was a dress rehearsal for Boston. It's a little like a wedding where everyone's the bride and the church has the longest aisle ever.

DUDE!!! 3 weeks to go....are you feelin' it? Reading your recap totally took me back to last year....you're in for the run of your life!

You sound so ready! Very psyched for you! Glad the dress rehearsal went so well!

Looks to me like someone is ready to run Boston. Great job on the run. It's going to be epic!

Sorry it took so long to comment, I've been waiting until I had a chance to read and digest. Great job! Your paces looked strong, and great job on Heartbreak Hill! I think you are gonna smoke this thing in a few weeks. Your lower quads were probably a little sore from the first 13 miles being downhill ... mine were anyway! That's the only word of caution I would have for you ... you'll probably be going a little faster on race day with the crowds and adrenaline, but that long downhill to start the race has a deceptively cumulative effect on your quads. Watch your pace and don't burn up your legs, or HBH might not go so well next time ... ha. Great job Jose!

Talk about killn it man. Hey make sure you do the TWO POO rule! nothing gross about that. You are so ready. Best wishes man.