Got this in the mail on Saturday: 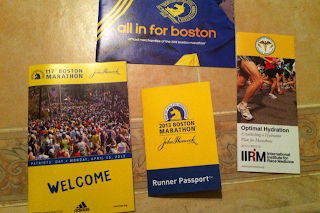 My Boston Runner Passport, which has my official packet pick up form: 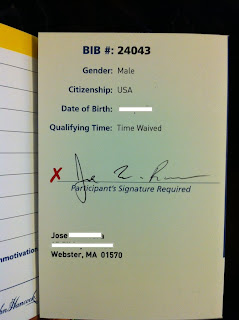 along with a welcome pamphlet that has information on everything Boston, from parking to local restaurants, a hydration pamphlet and the official 2013 merchandise catalog. Exciting stuff!!!!  The only real important thing there is the passport. I'll need that to pick up my stuff at the expo. From the merchandise catalog, the only thing I really want is the jacket, but I might get the hoodie only because it looks cool and I love hoodies!. 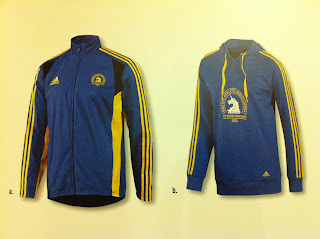 Kinda pricey though. $100 for the jacket and $60 for the hoddie. Ouch! But being my first time, I might just do it.

After running the 21 miler on Saturday, I took Sunday as a good rest day. I needed it. Today, I played it by ear. I brought my running stuff to work with me just in case, but I then decided not to run. Still a little sore. Not going to push it this late in the game.

I ended up going to the club's pub run tonight because I needed to pick up my sweatshirt that I had left one of the vans on Saturday. I thought about running in tonight's 5k, but decided on a beer instead. I hung out for a while and waited for them to get back. Had some good conversations tonight.

This club has a great bunch of people. I can't say this enough. From the president of the club to the new members, they are just the most friendly and funny group that you can ever meet. I am happy and proud to be part of the Central Mass Striders.
-

I am now in tapertown. Nothing more to do now than to just run smart and stay healthy. My next two "long runs" left are a 12 miler and then an 8 miler..... feels weird to think of them as easy runs :)
_

Hey... did you guys notice the change in the blog banner? ... LOL


Have a great week everyone!

YAHOOOOOOOOOO can't wait to hear all about it!

Get everything you want to buy. I still think about the marathon(not Boston) jacket I didn't get. Love the header - nice beard. I like the beard more than the finish line. It's in writing now - it's real!

the beard and the finish line.....nice!

The jacket is definitely pricey, but when you put it on afterwards, it'll be worth every penny! I'm a bit jealous of the color for this year......I LOVE my bright orange 2012 jacket, but really love the blue/yellow scheme for this year....more like the BAA colors.

The passport is pretty cool.....I don't remember what I had to show at the expo last year. Definitely didn't get a merchandise catalog, but I think that may have been because I was a charity runner (a.k.a. second-class citizen!)

I am very excited for you man. and i love the new banner. gotta get the jacket man. enjoy the taper!

It doesn't matter about the price for your first Boston. You should get the jacket or hoodie. Personally I'd go with the jacket because it wouldn't mess my hair up while I was putting it on but that's a girl thing and you might not be so worried about messing your beard up.

It doesn't matter about the price for your first Boston. You should get the jacket or hoodie. Personally I'd go with the jacket because it wouldn't mess my hair up while I was putting it on but that's a girl thing and you might not be so worried about messing your beard up.