The 15 miler on Saturday went as planned. I was little bit all over the place with my time, but mostly under 9min miles. Which my goal for this run. If I can keep this pace through the whole marathon, I will be happy! 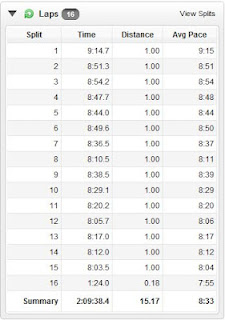 I needed to get this run in early because I had a pretty busy day ahead of me. So I was up at 6am, had coffee and a Powerbar and out the door by 7. For those of you that do not know, I live in Webster, Ma. Webster borders Thompson, Ct. In all my time running, I have never run into CT. Just always stay in town or in the surrounding towns, just never in CT. Don't ask me why, just out of habit I guess. But when mapping out a 15 mile run I found a nice loop that a mile into my run it goes into CT for about 4 miles then comes back up into MA for a mile, then back into CT for a bit, then back into MA. (see the map below)
The run into CT is all country roads. Mostly flat for the first 3 miles, then it's rolling hill from there on. I run by farms, ponds, rivers, swamps and by beautiful homes. I almost stepped on a turtle that was on the road at one point. I saw frogs jumping into ponds as I ran by them. I even saw a place that had Emus running on their property! ..... What!?  Emus I said! Giant birds man!! 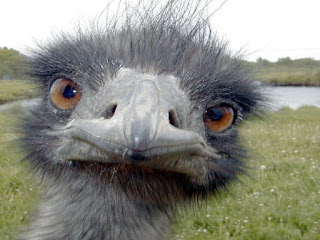 If I would have saw them at mile 14, I probably would have thought I was hallucinating!  Nope... very real.

Anyways... I think I found my new running route. The best part about it was that I probably saw 6 cars the whole run into CT. In Webster I'm always weary of cars as I run on busy roads all the time. All this time and it was only a little over a mile down the road.

Today I ran 5 miles this morning. By 3pm I was edgy and looking for something to do. So I hopped on my bike and headed towards CT to check out some trails that I had noticed when I was running the day before. I basically jumped into the first entrance that I saw to see where it took me. 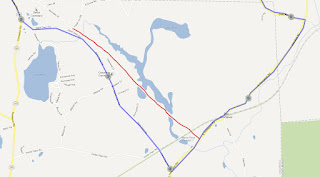 As you can see on the map, the trail (the red line) was pretty much straight except that it had a lot of other trails that ventured out to the left and right. This being my first time on it, I stayed on the main trail just to see where it came out. At one point I had to pull my bike off to the side at let a parade of noisy 4 wheelers go by me. Mostly all kids. I swear they revved their motors louder as they went by me. The trail ended back out on the road but across the street the trail continued on. I decided to stick to the road and basically followed the same route I had run the day before. The hills were tougher on the bike in my opinion. :) I plan to run these trails next time and venture off into the lefts and rights. These would be great for early morning summer runs!

That's it for me today. Hope everyone has a great week! Happy runnings!

You've got a whole new world to explare by the looks of things. It's always fun finding a new route.

New trails...VERY exciting!!!! Of course, I'm all over the trail running lately ;)...do you run trails alone? I would like to but it's the one place I don't feel safe enough to do all by myself. Good thing I have a friend committed to one pretty much all day trail run each week....yeah, we're crazy like that in upstate NY ;-D

Brilliant! I love finding a new route. Especially if it is traffic free.