What a weekend! Rained all day Saturday, but I still managed an 11 mile run first thing in the AM before the heavy down pours began. At noon I drove to Springfield (about an hour)to pick up my race packet for the Half that got canceled on Sunday. Pick up was at a corner of a hotel lobby. Just one guy with a pile of bags on a table. Kinda sad looking. No ID was needed. They guy just asked if I was doing the half or the 5k and then directed me to right pile of bags. Any one could have walked in and grabbed one. 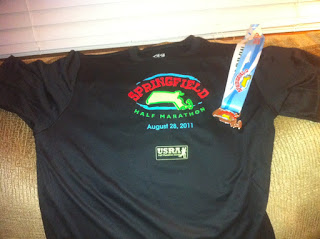 The bag consisted of your t-shirt, finisher medal and some energy bars. That's it.


Irene got here Sunday morning. I have never heard blowing so hard. Not going to lie... it was kinda scary. At about 11am the power went out and stayed out until early Monday morning. I have to say I too would not have survived the pioneer times. I love my family and I love spending time with them, but is only so many games of UNO one can play. It was definitely a long day!

The only damage I got was one of the trees in my back yard split almost in half. The part that is in danger of falling faces away from the house and is held up by another tree.

What sucks is, had it fallen, insurance would have taken care of paying to have it removed. But since it's still up they will not cover it. I called around and got three quotes today. All at about $1000...yikes!! Believe me, if I could push it (safely) to make it fall I would. But it's so wedged against the other tree that there is no way to do so... I got 3 more quotes tomorrow.

I did manage an 8+ mile run this morning. It was nice and nippy out. I haven't had a nice cool run like that in a while.

I need to look for another race to do. I don't want all this training I did to go to waste.

I guess it's good you got the Swag Bag and the medal. Although I am not sure I would know what to do with a medal from a race I didn't run. Donate it to a kids charity I guess.

Forgot to mention that I gave the medal to my 10yr daughter. I think one of her dolls is wearing it :)