Last week at work was kinda crazy. We had one guy on vacation and we were holding sales meetings at our location which meant a lot more people in the building... and a lot more people with computer problems. The weekend couldn't get here fast enough!

Friday I did some trail runs with Ernie again. What an awesome run it was! I have never been a big fan of the fall season. I'm not into the looking at the fall foliage and all that stuff. When the leaves change color it means only one thing for me...... winter is coming! But I have to admit, these few trail runs that I have done is starting to change the way I think about fall. This could be my new fall thing to do. We were talking about doing this at least once a week. That would be awesome!

Saturday I ran a 5k in the next town over. It was a fundraiser for the music class of the middle school. It was a small race. I would say a total of 150 runners\walkers. I lined up right at the starting line, which I hardly ever do. Half a mile into the race and I had claimed 3rd place and held on to it 'til the end. The course was very hilly. Like ridiculously hilly! I almost felt like walking at one point, but the thought of holding on to third place kept me going. I know the area very well, so it felt like a very fast race for some reason. 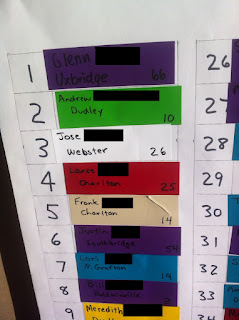 Blocked out last names to protect the innocent ;)

1st place (42yr old guy) came in at 18mins and change, 2nd place (17yr old kid) came in at 20 and change, and me 3rd at 21:06. I got first place medal for my age group. This is a first for me! In reality, not that I was any faster, just that their wasn't that many runners. I keep telling myself that if the two guys ahead of me would have stayed in bed, I would have come in first place! Hehehe... 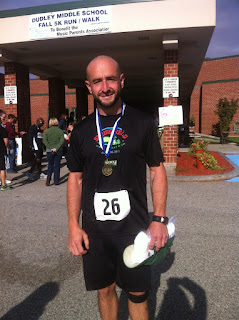 I'm that weird guy that always asks a stranger to take a picture of me after a race... I have done this for every race! Why stop now.

My younger brother had dropped me off at the middle school before the race. After the race I ran the 7 miles home to make it my long run of the weekend. While running I noticed that I was getting some weird stares from people. It wasn't 'til I looked at my reflection at a store front (about 3 miles in) that I noticed I was still wearing my race bib.... LOL. I took it off but couldn't stop giggling to myself.

Today was a rest day.... from running anyways. First thing this morning I went for a nice 4 mile walk with 10yr daughter, mowed the lawn and did stuff around the house. It was a good weekend! Thank goodness!!

I hope everyone had a good weekend as well!

Sweet bling! Who cares if it was a small race...you're the one that made the effort to get out of bed and race that morning! You earned it!!! Congrats!

Congrats on the awesome race! I can totally relate to fall running. It's bitter-sweet, it's a great relief from the summer heat-grinder, but it means that in a few short weeks, the most dreaded part of my training will begin, below freezing wind-chills. I HATE WINTER WIND!!!! Have a good one!

Great job on the medal! I had a good chuckle on the bib thing. Pretty funny! Sounds like something I would do!