I think about posting on my blog almost every day. I get these ideas or take some pictures during my runs that I want post about..... But honestly it's been way to busy for me lately. Especially with work. I've mentioned before that I deal with computers all day long. When I get home at night, a computer is the last thing I want to look at!.... plus to be all honest, I'm not that much of a writer. It probably takes me a bit longer than most people to actually write down my thoughts. So I make sure I have the time :)

Today I wanted to run, but really didn't want to run alone. I have a coworker, Ernie, that also runs during lunch so I sent him an email to see if he was running today and if he wanted company. He replied saying that he was running some new trails that found and sure I could come along. YES! I haven't run to many trails, only because I don't know of many so I thought this would be the perfect opportunity to learn of a few around my work. 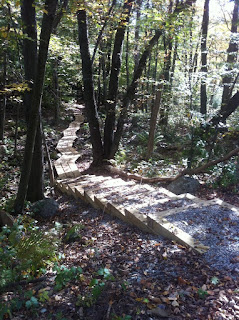 One of the trail entrances

There were so many trails out there that I never knew existed! Apparently there is a big trail running group out that way and they run these trails and others that stretch out for miles across many of the surrounding towns. We ran roughly about 7 miles at Ernie's 10min mile pace. Which was fine with me. I was enjoying the views of all the nature around me. It was awesome!! I could of run another 10 miles, but my time was limited and I had to had back to work. Unlike Ernie, I'm an hourly employee and I have to punch back in when I get back. I was a bit late but it's never a big deal with my boss. I make up my time during the week.

This a must do again, but would like to plan it out for the weekend so I have more time to explore all these trails!

Any trail runners out there? Would like to lean more about trail running groups. Would be nice to mix up my runs a bit.

I keep saying I want to add some trail runs in to mix it up but I have no idea where to run. I'll be interested to hear what you find in MA.

I'm gonna try to add some trails this winter - I don't really do much of that right now. I used to take a LONG time to write a blog because I would proof-read it a thousand times. But now, I usually just glance over it. The down side is I have a TON of grammatical errors ... oh well, not like I'm a professional or anything. I always enjoy your blog.

I don't get the "take pictures of my run" phenomenon. Aren't people supposed to be running?

Thanks for the comments.
Definitely will be doing more trail runs this winter. ... and Jamoosh the picture was taken at the start of the trail, not while running :) I thought it was cool that someone had built steps into the woods.