I feel like I have a lot to blog about, but I don't know where to start.... so I'll just start with one topic and go from there. No rhyme or reason to these topics. Here is my Labor Day Weekend mash-up.

-
I mentioned before that I was planning to do an October marathon. There are 3 of them happening in October that are local to me. Hartford on the 13th., Lowell on the 21ts and Cape Cod on the 28th. I really wanted to do Hartford only because it was the easiest one to travel to. But, where I am in training, I don't think I would have been ready. Lowell, (Bay State Marathon), was my next choice, but then I heard about the Cape Cod marathon. It's a week later than Lowell so I get an extra training week, plus I heard the scenery of this marathon is an awesome one! 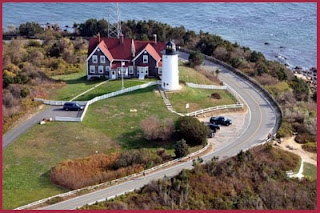 So Friday night I bit the bullet and signed up for Cape Cod!
I'm nervous now......

-
As part of my training, on this past Saturday I had to run 17 miles. The plan was to head out by 6am to beat the morning sun. What happened though, was me rolling out of bed at 7am. I was soo tired. I literally had to force myself out the door. I ended up doing 17.8 hard miles. My legs where not with it during this run. They felt heavy all the way. It just felt like a long run. 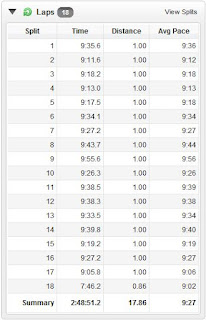 My pace though, was where I wanted it to be. It just felt like a harder run than it was. 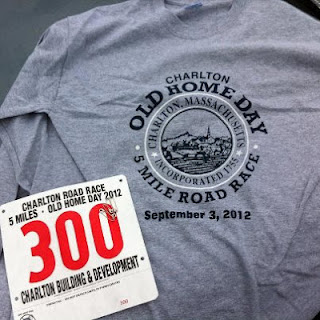 I love this race because it's part of the Charlton Old Home Day Festival. It's an awesome place to hang out after the race to watch some shows and to eat some junk food! I ran this race last year, and came at 38:10. I remember this race year felt tough to do. I remember wishing it was over with at about mile 3. Today, at mile 3 I was like "wow, already?". I was a little worried of being sore or achy after the 17 miler, but  I felt good all the way through. I was also surprised to see my sister-in-law and my nephew on the side lines cheering me on. I usually go to races by myself, so I never expect anyone I know out there for me. So that was wicked cool!! 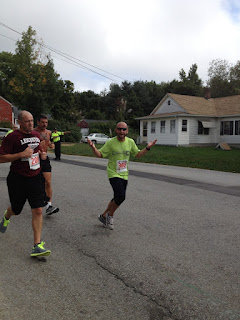 She snapped this picture..... Thanks Sue!

5 miles came quick... I came in at 36:56 beating last time by over a minute. A new 5 mile PR!!! After the race, I hung out and talked with a couple of the "regulars" that I always see at these local races. Yeah, I ate some junk food too :) Today was a good day!

-
I have a couple races lined up in the month of September. This Saturday I'll be running Canal Diggers 5k in Worcester. I did this one last year and it was an awesome time. Free BBQ and free Harpoon beer after the race. Enough said!

The day after I have an 18 miler planned. This will be another tough run.

Also lined up and part of my training will be Surftown Half Marathon. This will be a new one for me so I'm looking forward to it. Plus I might get to meet Bill over at Impossible is Nothing. He is also running this one. Hopefully, he can wake up on time this time... LOL. Sorry Bill, had to throw that one in!

-
Back to the grind tomorrow.... at least I'm not traveling for work this week. Have a great week everyone!!

just had to throw that one in, eh? LOL

Don't worry, Jose, I'll be up for Surftown. First off, I've figured out how my alarm clock works, and secondly, there's NO WAY I'm not going to skip getting my hands on that awesome finisher's medal!

So while there's no possible way I'd be able to keep up with you, I'll be down there....hope we can meet up!

Congrats on the new 5-mile PR! These long runs are really paying off for you!

Cape Cod sounds like a great choice. Can I put in my order for lots of photos? After all you'll only be running a marathon - you can multi-task can't you?
Congrats on the new PR. You're getting faster and faster.