As I prepare for Marathon #5, 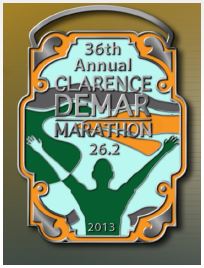 I find myself not wanting to run the same ol' roads I ran for the last marathons. I'm speaking of the long runs when I say this. I hate that I pretty much know the mile markers to every run without looking at my Garmin. Mentally, it kills me. So for the past 3 Sundays, I've been running roads I have never run or even driven down before. Webster, Ma. (where I live) boarders Thompson, CT. I have run into CT before, but usually for 3-4 miles before it loops back. 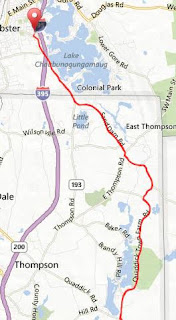 Yikes! I had planned 17 miles. I stop and look at Google maps on my iPhone to see if I could loop around. Eh, not really, so back I head in the same direction I came. I figured I would do my 17 and walk the rest if I had to. But I ended up pulling the complete 20. I felt great!

The week after was my scheduled 20 miler, but since I did 20 the week before, I figured I do the 17 instead. This was also the day after the Spartan Race, so it kinda worked out well. In this run I headed down to CT again, but this time I took a right on a road called Buck Hill Rd. You would think that with a name like Buck Hill, I would have a some kind of clue of what was ahead of me. Nope. It didn't even register until I came up on the steepest hill I have EVER run .... but I chugged along.

I had been keeping an eye on my miles during this run. So on the other side of this mountain I came upon the halfway mark. So again I pulled out my Google maps to see where I was and to see if I could make a loop back into MA somewhere close to home..... NOPE. And why? Because I was in Rhode Island.... Yikes, once again!! I knew we were not too far from RI, but I never realized how close. 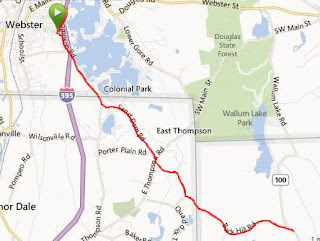 So with a heavy heart, and a two heavy feet, I turned around to face that mountain once again. I made it home and was pretty much useless the rest of the day. Ran in 3 states in one run - now that was a first!!

Today, I ran 16 miles and once again I headed out towards CT, but this time towards streets that I recognized but haven't down in about a year. And also in the other direction of RI!! I only ran about 3 miles in CT and the rest were through, Dudley & Oxford, Ma. I just ran knowing that I wanted to loop back this time instead of doing an out and back. By the time I came close to my house, I was still half mile short. I was going to call it quits right there, but ended up pulling the extra to complete the 16 miles. 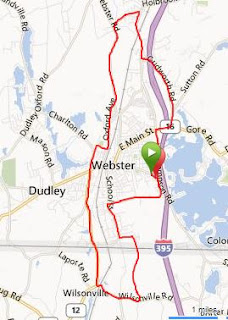 So these runs were quite the adventure! I'm not too crazy about out and back runs, but being that these roads were new to me, they weren't that bad. These were all solid, quality runs and that's all I can ask for. Next week calls for a another 20 miler. Can't wait to see what adventures I "run" in to then!

Do you runners out there do randoms run like these or do you plan your all you runs?

Marathon day is only 6 weeks away!!

I am SO with you on not wanting to run the same old routes from last year!!! Out and backs do suck, so does getting lost, but not as much as getting bored running. A three state run, I'm jealous!!

I love exploring new routes but I don't know if I'd be thrilled having to run an extra 3 miles on a long run. That's a whole 5k (nearly) and that's nothing to be sneezed at.

I run a variation of the same route pretty much every day...boring. I'm afraid of getting too far from home. It is pretty cool to run in 3 states though!

These days, all my runs are random - even the mileage!