First, I want to thank Michael from Slowly Tri-ing for the free entry to this race. A couple of weeks back she did a giveaway and I was randomly picked as the winner. Woot!! 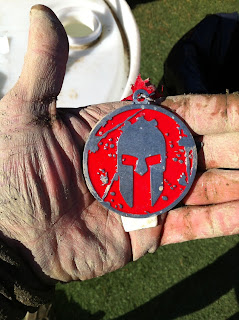 This event was held Saturday in Amesbury, Ma. It's about an hour drive from where I live. My wave wasn't 'til 3:45 but I headed out around 10:30am to check out the place and also to meet up with a few friends that were also running it but at earlier times. It's a good thing I left early because the drive there was horrific. It took me almost 3hrs to get there! At times I thought about turning around and going home. But I kept telling myself that this was a small price to pay for a free entry. By the time I got there, my friends had already run their wave and were most likely on their way out. I never got to meet up with them. I did unexpectedly run into a guy that works at my office... Last person to expect there! Ha!

So I hung around and checked out what I could see of the course and the "competition". 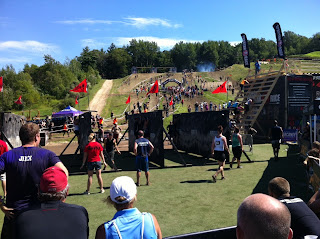 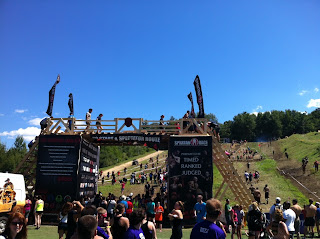 I noticed on the course that people where doing burpees. I was like WTH? Thats dumb. I dont want to do burpees! So I asked someone if it was mandatory and they said you have to do 30 burpees if cannot complete obstacles. Right then and there I told myself, there is NO WAY I was doing burpees!!

3:45 came quick. Before you know I was lined up and ready to go. I made sure to line up at the front only because the first thing we were doing was running up hill and I didn't want to get stuck behind someone. So off we went up the hill, then through the muddy woods for about an 1/8 of a mile, there we find the first obstacle which was 3 walls. Jump over the first one, under the second and through an opening on the last one. Easy enough. Then some more running.

Here is where it gets blurry for me.... I know the obstacles I did, but don't know in what order they were, so I'll just tell you what obstacles they had.

- 15 - 20 ft Rope Climb - I was winded when I got there, but climbed up and run the bell with mo problem. But then slipped off it on to the mud puddle below.

- Lifting a 140 pound cement block with a rope up to the top a structure then gently putting it down. (This one was tough!!)

- 3 big puddles of waist deep mud you had to cross

- Truck tire pull - You drag the tire out 10 ft then pull it back with a rope.

- Thrown a spear into a haystack shaped like a man (made a lucky shot!!)

- A mud crawl under barbwire that I swear was 50ft long!! This one was tough and my knees took a beating. Rocks can be so unforgiving! Towards the end, you slide into a shoulder deep mud puddle with a wall at the middle of it. To get to the other side, you have to submerge yourself into the mud! That was actually kinda cool!

Towards the end they have the fire you you jump over and right before the finish line the have 3 guys with big Q-tip looking things attacking you as you go by them.

I completed ALL obstacles!!! I did NO burpees!!! 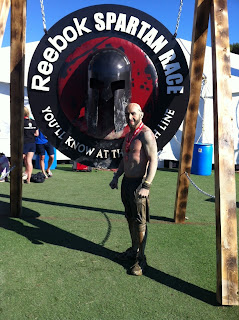 This was a cool event. It was well organized and had plenty of entertainment and many volunteers. Though some of the obstacles are tough, they are doable. The Sprint is geared for the masses. What I mean by this, is that everyone and their grampa was running this! Literally!! I saw a guy running with his grand kids!
I heard some people say that they were training for months for that day. In my opinion, if you are in good of shape, you can do this easily without training. I'm glad that I was able to complete this though. I am in better shape than what I thought!

So that was that. My ride home was the hour it was expected to be. I took my daughter out for some ice cream and called it a night.

I woke up today and I felt like someone beat me with a baseball bat! My shoulders were achy, my arms were sore, my neck was stiff and even my butt cheeks hurt! Maybe I'm not in good shape as I thought I was!! LOL .... The kicker was that today was my scheduled long run for the week. I had to do 17 miles.

Congrats on avoiding the burpees :) Can't believe you followed up with 17! Great job!

You are a beast!! I am so glad you had a great race and a good time! I'm glad you won the entry because it looks like it was perfect for you. Top 1%!! Wow!

17 miles the next day...no way I could have done that. You are awesome!

You are Spaertan. Drink big beer!

You are undeniably certifiably insane. But if you're having fun then it's worth the pain.

straight-up BADASSSSSSS!!!!! Well done, my friend! See you at Running With The Wolves....I'll be the guy at the back of the pack! LOL

Dude that is awesome. I would have cut down my long run. Great job and cool medal too.

Congrats to the new .... Spartan!
Great job and wonderful medal.