So I haven't officially signed up for a fall marathon yet. But I know I'm doing one. Just haven't decided on which one. So my runs lately have been marathon training like runs. My usual 3-4 runs during the week (3 to 8 miles) and a long run on the weekend. This weekend I planned at least a 13 mile run. Was going to do it on Saturday but had a late night Friday night and then the moon & stars didn't align the rest of the day. Sunday was my back up day.

I had a busy day ahead on Sunday, so the plan was to head out early and get these miles done. I was up at 5am and out the door by 5:30. As soon as I stepped outside, I realized I that I couldn't think of a 13 mile route I had run recently. As I started to run down my street I decided to head into Thompson, Ct. and do a loop that was 14+ miles. I figured at 13 if I was tired, I would walk\run the last mile home.

Thompson, CT is only a mile from my house. This Thompson run is all back roads. It's a very scenic and a very beautiful run. I'm in CT from mile 2 to just about mile 7, then I loop back into Webster, Ma. for another 3 miles of back roads before I'm back on a main road.

At that mile 2, I encountered a horsefly. No big deal, it was just flying around my head. I figured a couple of swats and it should be gone. A mile later, I realized that there was more than just one. I started getting bites on my head and neck. I couldn't tell you how many times I smacked my head trying to kill the suckers! 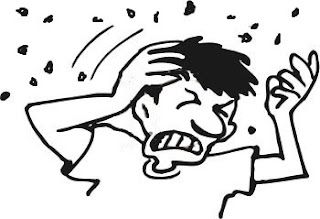 By mile 4, I realized the buggers weren't going nowhere. My plan now was to just ignore them and continue running. There was nothing I could do. By my 7, it was out of control!! I had one go up my nose, in my mouth and even had one stuck in between my shades and my eyes. By this point they were dive bombing in to me and biting me. There had to be at least 7-8 of them. It was maddening! I honestly thought about flagging a car down and jumping in!! I'm sure someone would stop for a crazy looking guy waving his arms around and smacking his bald head. Right?

By mile 10 I was back on the main road and just like that, they were gone. I had spent the last few miles fighting these suckers off that I had not really paid attention to my run. Here I was at mile 10 and feeling great. By mile 13 I was still feeling good, so I decided to finish off the 14+ running. And even then, at the end, I felt like I had another couple miles in me. I like not feeling like I'm dying at the end!

This run was a memorable one. Even though I finished strong, I think I have to place this at the top of the list of my most suckiest run. I don't think, I'll be running into Thompson anytime soon.


This week I'll decide on my marathon. I've narrowed it down to two. I just have to see which one of the two fit into my schedule. I'll keep you guys posted.


Have a great week everyone and a Happy 4th of July!!

Come to St. Charles, IL and do the Fox Valley with us! <3

Ughh. I hope you didn't swallow any of them.

That run just sounds crazy! Can't believe you went as far as you did dealing with those flies!