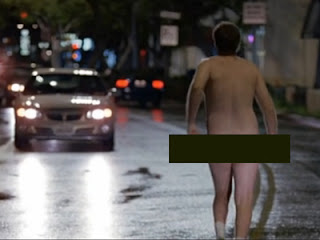 Streaking Through the Quad!!! Wooo!


Nooo.....
I'm talking about running without my Garmin. I've been running at work during lunch and I kept forgetting to grab my Garmin in the mornings. Not a big deal. I know the back roads behind my work like the back of my hands. I know what roads to take if I want to run a 3 miler, 5 miler and\or up to an 12 miler. I've run these same roads for the past 3 yrs.

I don't know about anybody else, but it's such a freedom to run without the Garmin. Nothing telling me how fast I'm going, how far I'm running or how long I've been running.... it's just me and the road, enjoying every single step. It's been awesome!!

Like most runners, I'm a stat freak. I like to analyze my runs. The Garmin has really become a useful tool to a lot of us. But at the same time, we've become too dependent on it. Don't you  think? I can't tell you how many times I look at it during a run or a race. Sometimes I look at it and not even realize what I looked at so I look at it again.... LOL. It's crazy!

It's all good though. Like I said it's a useful tool. For training it's been perfect! I don't know what runners did before it.... Really? What did they do? ? Hmmm?
Running without it this week has been great though. I'm not training for anything so it's OK. I've just been running just to run. Just for the love of it. Isn't that why we all started running for??


Anyways......
How do you guys feel about running without your Garmin. Do you feel naked without it? Do you care either way? I'm interested to know how you feel.
Posted by Jose at 11:14 PM

I like to wear the garmin but put it on a screen that just shows time of day only. That way I can't accidentally glance at it and see my pace without pushing a button. I don't look at it while I run, but then I still have the data to store and analyze later. :) Which garmin do you have?

My Garmin is sad. I have not run with my Garmin since January.

I feel so alone without my Garmin. My addiction is so bad that I don't feel like the runs that I do naked even count.

I think I rely on it to tell me that I can go a little slower, because why on earth would I want to run any faster than a 9:30 or 10:00.... But at the same time I like that feeling at the end of pushing the button to say DONE, can we say bi polar? I do try and not look at it I know how far my at work loop is and when the miles click away and how hard I am honestly working and how much harder I could work some how I am compelled to let that split second glance determine my mood about the run until the next split second glance...

I don't like running without the Garmin. I will do runs where I don't look at the watch on occasion, but I "need" the satisfaction of uploading the record of those miles when I'm done. :)

We're going streaking!!! One of my favorite movies :)

You would think as slow as I run it wouldn't matter if I ran with a Garmin or not, but I do feel like it helps me keep on track, without it I think I would run much slower.

I emailed you your race code. Please let me know if you didn't get it or have any issues with it.

Sorry, I put my wrong e-mail address in my blog post :) It's weatherlymh01@yahoo.com