This past weekend I made the three hour drive to Killington, Vt. to take on the Beast. The Spartan Beast! Now before this weekend I had only done one Spartan race ever. I really had no desire ever do one again. But back in January over a few beers with some friends, I apparently agreed to sign up as part of their team for this race. Yay for beer muscles!! 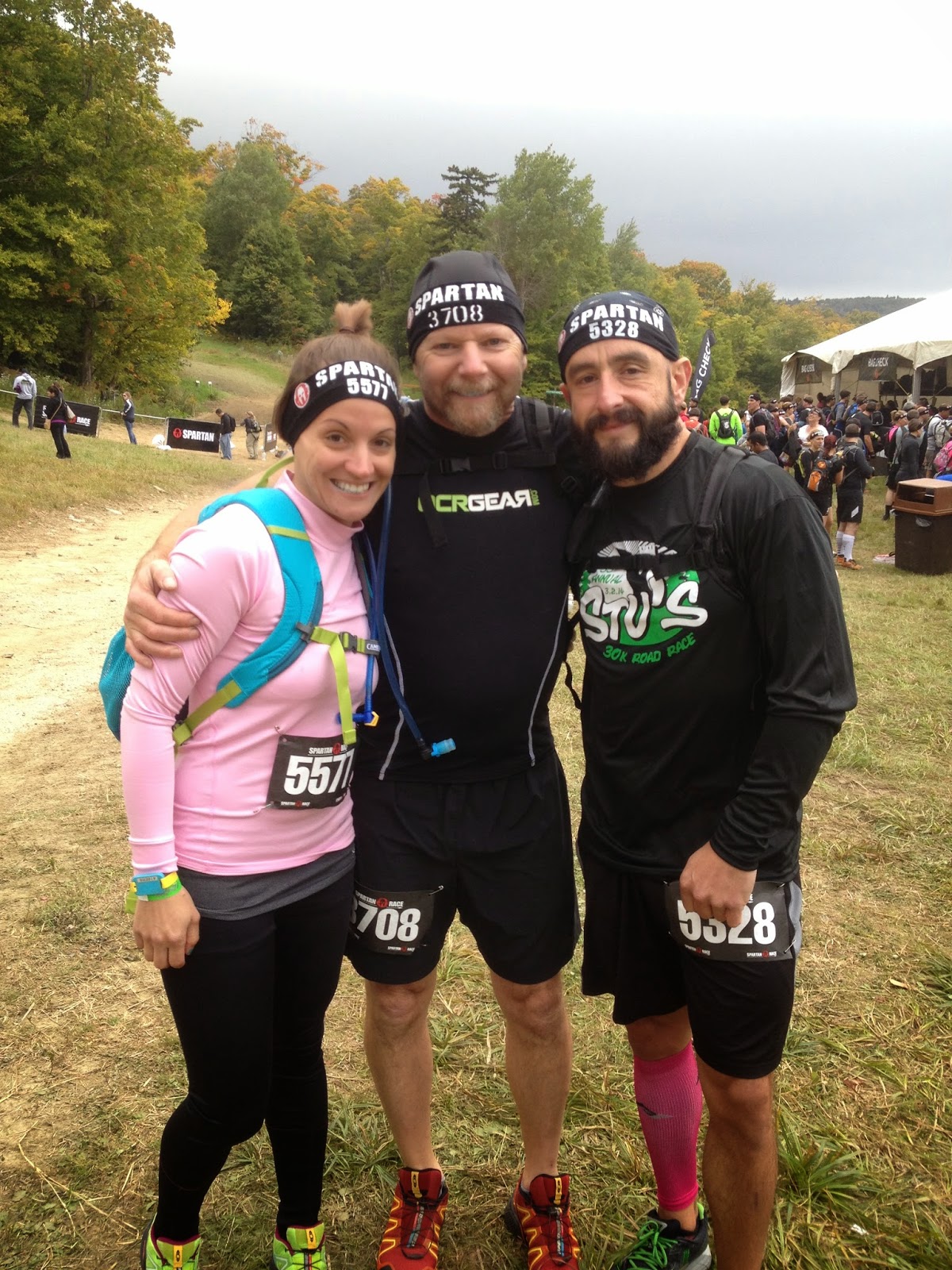 In a blink of an eye, September was here and there I was at the staring up at the Beast,

You cant see it, but there is more up in them clouds!!

then taking off at the starting line with a smile on my face. 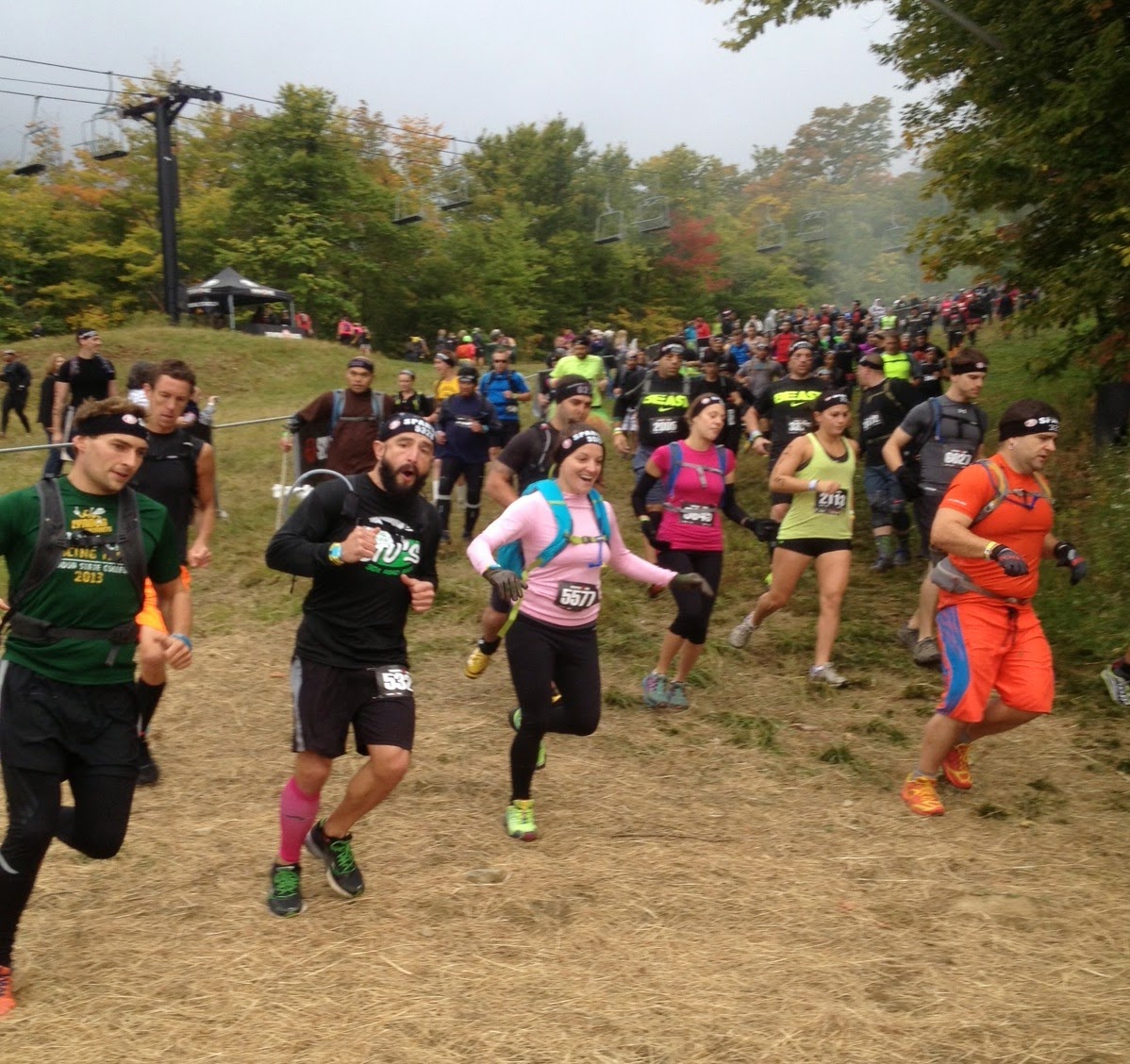 The first few obstacles were the traditional Spartan obstacles., wall climbs, barbwire crawls, bucket carry,.. the fun stuff. But the one that took me off guard was the swim obstacle. You swam out to a bridge and then went up a rope ladder then swung across some ropes up the bridge, then you jumped off and swam across. Here is a video from last year that I found on YouTube to get the idea. Anyone that knows me, knows that I have a fear of swimming. But for some reason, I figured I would conquer this fear by proving I can do this. My friend Kristen decided on the burpees instead of the swim. Smart move on her part cause 30 seconds in my swim I new it was mistake. The water was 50 degrees and my arms were tired by the time I got to the ladder. I climbed the ladder but was only able to swing across two of the ropes. My arms were jelly! And I still had about 30 ft to swim to get to the end!!! At that time race officials were yelling at everyone to get out of the water. There was a CODE RED. Someone was missing and they were sending in the dive team. At that point another swimmer must have notice me struggling and asked if I needed help. Thank god! I don't know if they ever found the person that was missing.

After this event there was more mountain climbing but I was freezing this time around. If it was 70 degrees at the base of the mountain, it was 40 degrees at the top. I was miserable for a while just from being cold and wet.

I ran this race mostly with my friend Kristen. This race was important to her because it would  complete her trifecta of Spartan races. She is the real Spartan. I was just the dummy that singed up for it one drunk night :)  .... I wasn't doing it for me or for time. I was doing it to help her and to just do it.
The cool part about the race is that our spouses got to walk around parts of the course to meet us. Nothing like hearing their cheer and seeing their faces to brighten up our day. Plus they had food!! Killington offered free gondola rides for the spectators so they even met us at one of the bases at the top of the mountain.

Long story short (or just to cut it short)... 15 miles - 8hrs and 20mins after starting off with a smile, I crossed the finish line, wet, muddy, bloody and achy, but with an even bigger smile! Never have I wanted a race to be over like I wanted this to be over! I was ready for some beers and some food!! This is THE toughest thing I have ever done to date!!! 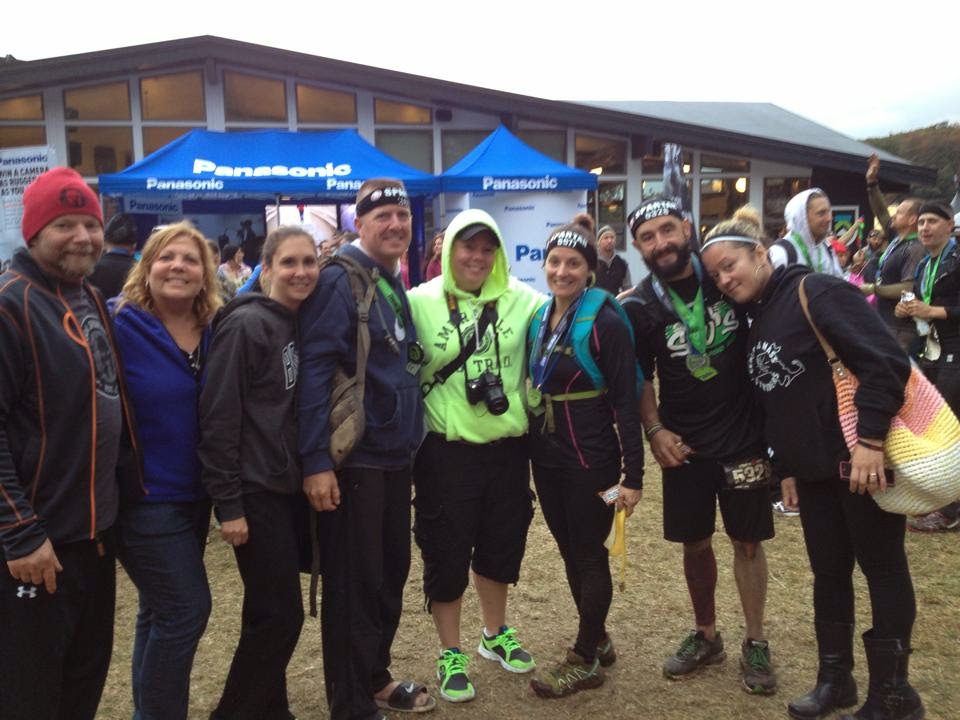 Thank goodness for our spouses for being there. Having them there made crossing that finish line that much sweeter! Couldn't have done it without their support.

I'm just glad that we got it done before the sun set. There was still people on the mountain when it got dark out! 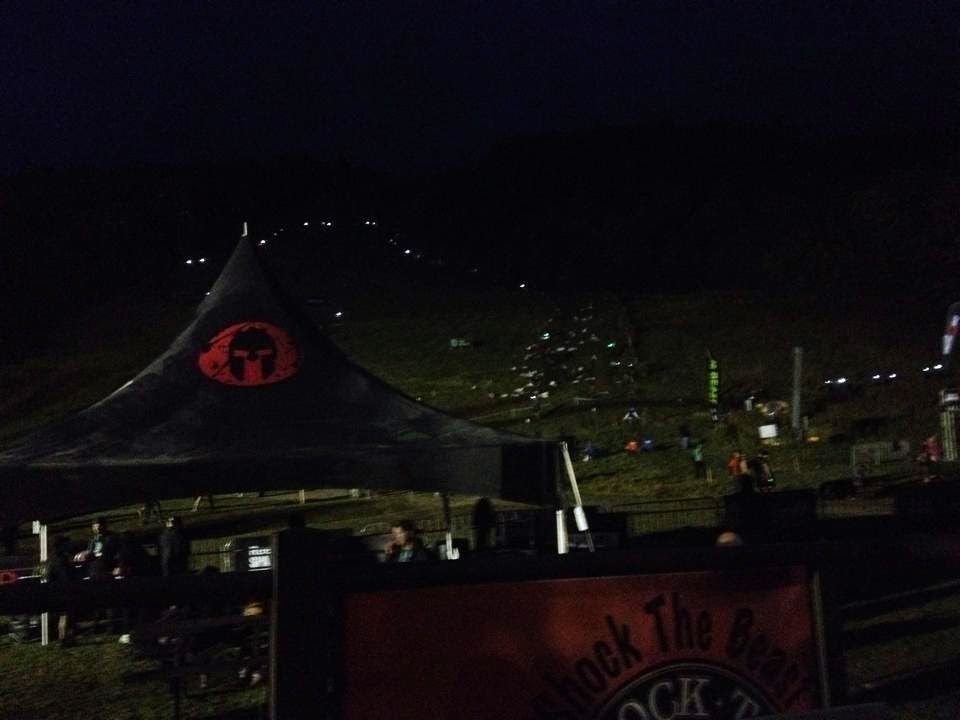 Oh hell no!!! It was tough when it was light out. Can't even imagine it in the dark!!

It was tough race. Like I said, THE hardest thing I've done to date! But I'm glad I got it done. I'm glad I didn't get hurt. I'm glad I didn't die. Besides the scary swim and some tough obstacles, I had fun chatting with my friend Kristen and with other runners. I use the term "runners" loosely. There was not a lot of people running this course. I know it's tough to actually run during some parts of the race, but there were plenty of sections that you could have. I ran when I could and I could have ran more than what I did. But I kept reminding myself that I wasn't doing it for time, I wasn't doing it for me. It was frustrating at times as my competitive nature kicked in and I wanted to just take off, but I didn't. I promised I would stick with my friend Kristen and that was what I did.

Would I do it again. I dont think so. I really don't care for these types of races. They are well organized and are very popular, but honestly, I enjoy running a lot more. I think I would rather do a marathon every weekend than to do this race again.

The medal they gave was sweet!! A lot bigger than their normal medals. 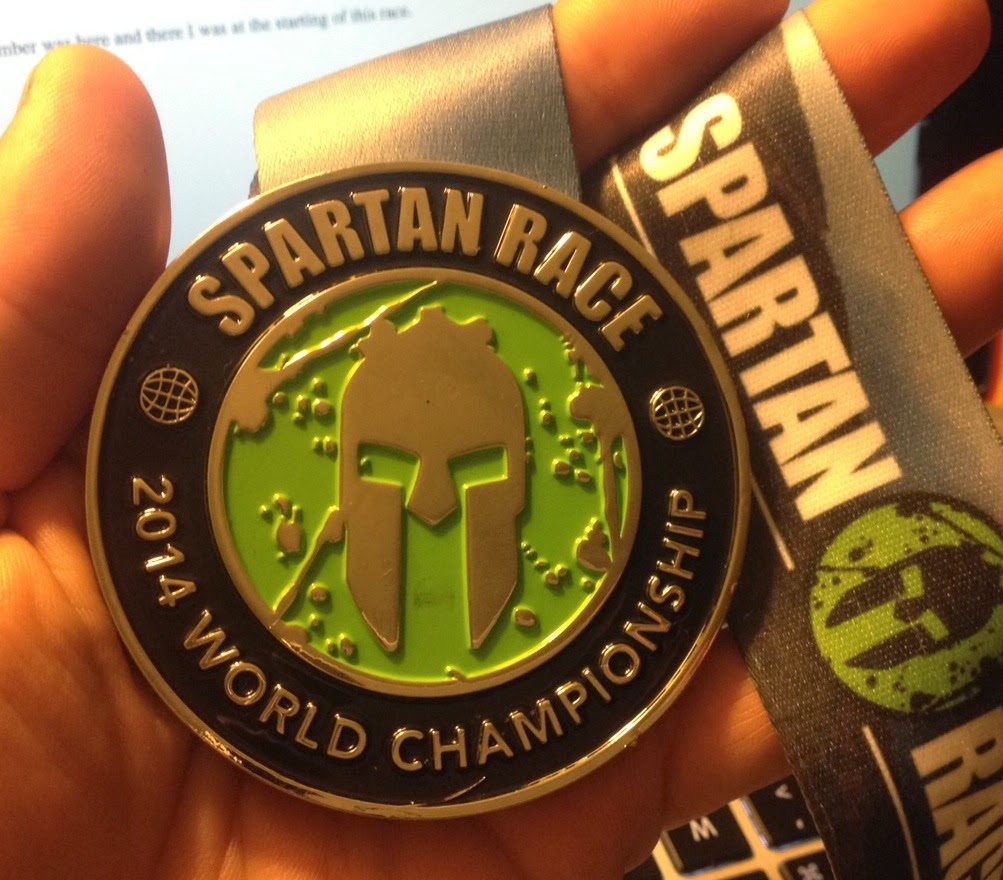 But then they also gave me this: 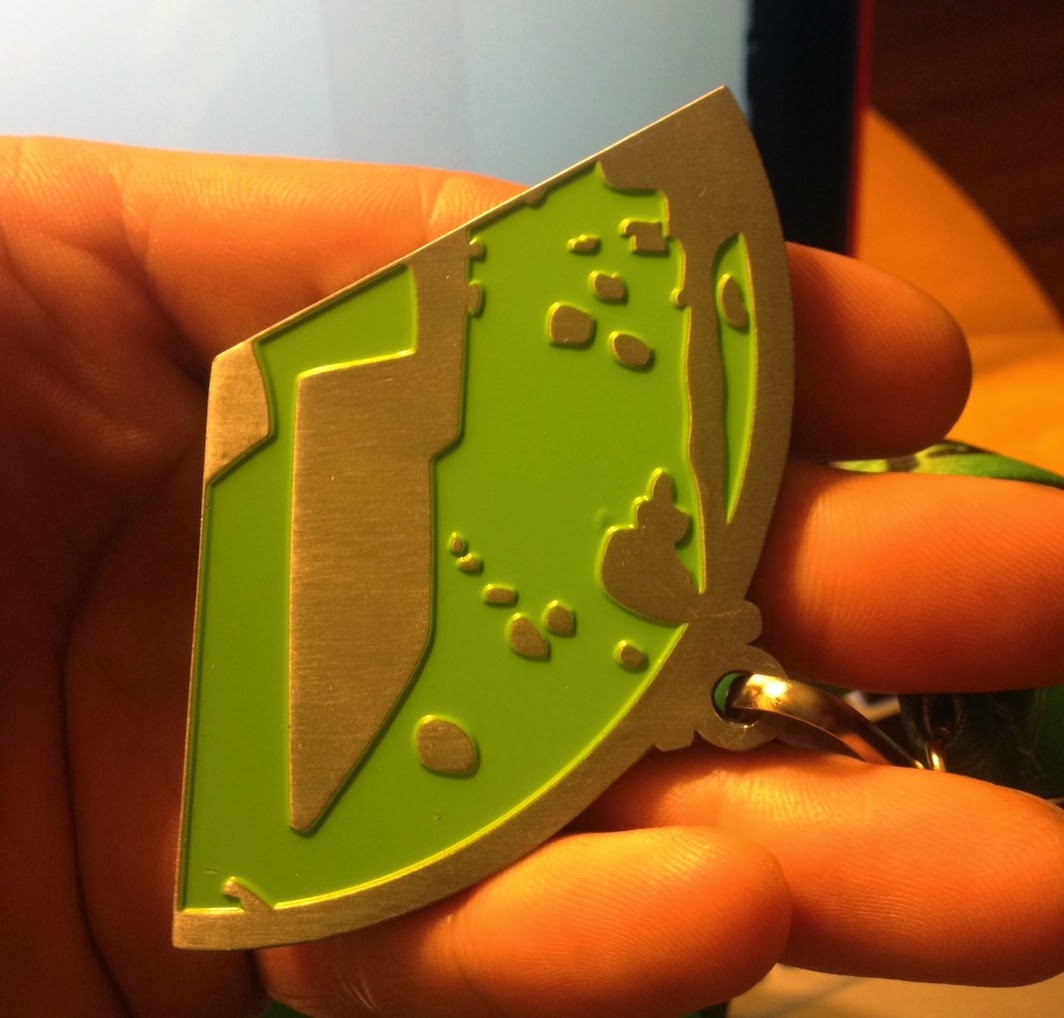 A third of the trifecta medals.
.......only a matter of time before my OCD kicks in.

20 miler this upcoming weekend
Harwich Cranberry Half the weekend after
KC Marathon is less than a month away!!

It's hard enough to race let alone get over, through and around obstacles. You're a braver man than I could ever be. Probably because I'm inherently chicken and a girl.

Well done! I don't know if I would try it... but put enough beers in me and I probably would sign up!!

I did my first obstacle race a couple weeks ago and feel the same way. No thanks

I dont think i will EVER do one of those. Hats off to you man. You are a beast. Sorry for the late comment. Lol