Saturday was long run day. 20 miles was on schedule. It was my typical Webster, Dudley, Oxford back to Webster run. As planned, I added an extra mile right from the start so I can try to make for at least a 21 miler. At about mile 12 somewhere in Oxford, I saw a another runner up ahead of me. When I caught up to this runner I realized it was an old friend of mine, Chuck. I've known Chuck for over 20 yrs and he just so happen to be running the same route I was. Chuck is a well rounded triathlete, but at 48, his training for his first marathon ever, the Amica Marathon, in Newport, RI. Just 2 weeks away.

I can't even begin to explain how good it felt to run into him at this part of my long run. Mentally I was beat. I have run this route 5 times already this training schedule. I was getting bored of it. We ran together for the next 7 miles before he split to head back home to end his 18 mile run. Our conversations during this run went from when we first met to him explaining his training plan for his last triathlon. As I am interested in doing my first Tri soon, I was sucked in to this whole conversation. He even gave me a contact for a lady out of Westborough, that gives swimming lessons. I was supper excited. 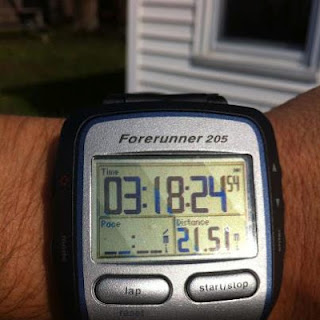 I say it was nothing because I finished strong, but I was hurting the rest of the day. My left knee and right ankle were sore after this run. There was a lot of icying going on that afternoon.

Sunday I volunteered at the B.A.A.Half. The day started at 4am with breakfast and a trip out to Worcester to meet up with running club at 5 so we can car pool into Boston to be there for 6. We were stationed at water stop #3 at mile 6. 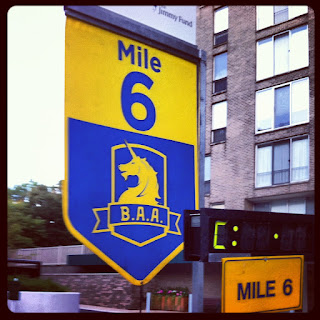 I can't even begin to explain how much work goes into setting up a water stop. Setting up tables, getting all the cups ready, filling them with water, trying to figure out how much to set up. The Gatorade comes in concentrated gallons that must be mixed with 5 gallons of water. So you mix it then you start setting up and filling cups. It's a lot of work. 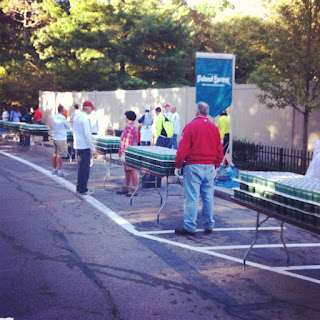 I think the worst part is waiting for the runners to start coming through. The wait made me nervous. 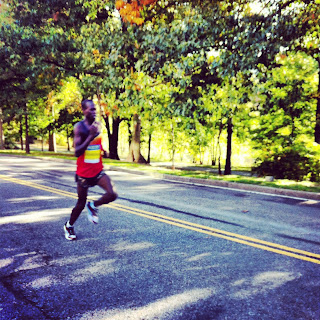 Allan Kiprono from Kenya (surprise!!!) wins the half.

The elite come through first, but water is the last thing these guys want. They are hardcore as you know, all the want is more pavement!! They didn't even look our way....

But by the time the "normal" runners came through, it looked more like Dawn of the Dead, but instead of looking for brains, it was water they were craving.... 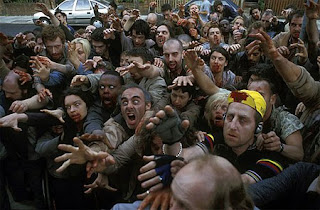 It was crazy.... It was kinda scary to times too. I might even have nightmares about it tonight.

As soon as the rush came on through, 7000 runners later, it was practically over kinda quick. All that was left was a massive clean up of empty cup that stretch out for about a quarter of a mile past our water station. And even then, that went kinda quick thanks to the amount of volunteers we had.

All I have to say is that if you have NEVER volunteered at a race. Please do so. It will change your whole perspective of any race you will ever do. Trust me. ... again, Trust me! You will never look at another volunteer the same.

It made for a long day, a long weekend actually. But the people that I met this weekend, the laughs that I had, the experience that came along with it, I would never trade. It was a really good weekend. 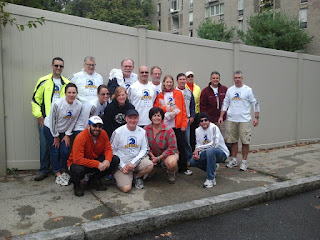 Oh yeah... and we got a really cool volunteer shirt: 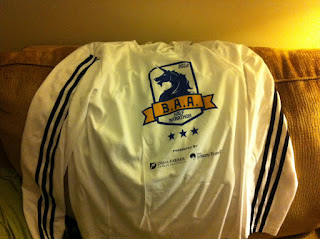 Have a great week everyone!!!!

Long runs always go better with friends. The miles go by so much quicker.

Great job volunteering. I've never done it (except for a very small local race where I was a marshall directing people - and I didn't do a very good job) but I do appreciate the effort that so many go to to make the races happy, comfortable and safe for us runners.

I've never volunteered, but people I know have told me how much work it is, so I really appreciate all they do and always try to make a point to thank them at the aid stations.

great job bangin' out that long run...you're going to CRUSH your next marathon!

And I know all about your water stop experience. When I volunteered at the 2009 Boston Marathon, it gave me an entirely different perspective....it was hard work, but it was a lot of fun, too! I still wear the jacket I got that day!

Great job on that long run!!

And good for you for volunteering! I've run a small local race but have never volunteered at one of the big races - gotta do it!