First and foremost, congrats to all who ran the Boston Marathon. It was a hot one out there today!! 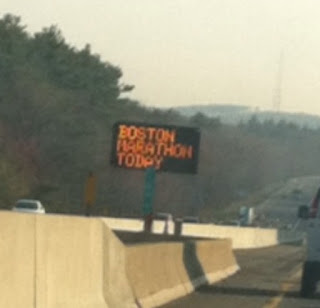 Like years past, I started my Patriots Day early... I was up by 6am and out the door by 7 on my way to Boston... well actually, Newton. I found a nice parking spot near the course at around the 17 1/2 mile mark. This is basically where the first of the hills of HeartBreak Hill start. I had my bike with me so I rode up HeartBreak towards Boston College (Mile 21) just to get the feel of the hills. It was early but there were tons of people already set up on the sidewalks claiming their spots. People that lived along the course were setting up their grills and tables and getting ready for a great time! I claimed a nice shady spot around mile 18. That sun was brutal today!

I lost track of time, but at about 10:30 or so the first wheelchair participant came by. 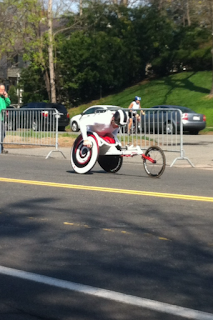 About 30mins after the leading women came flying by 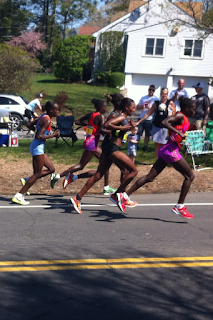 Then not to long after, the men 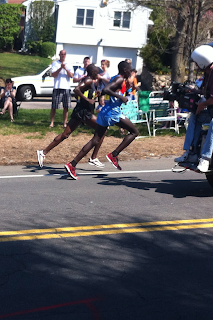 The crowds started rolling in after that: 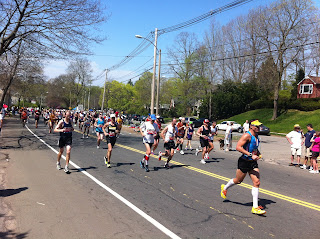 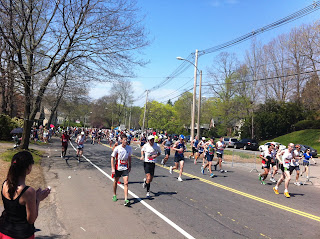 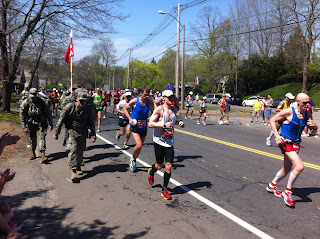 I moved on up to the top of HeartBreak Hill for a while: 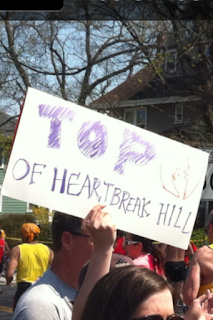 The look of people's faces when they read this sign was priceless. Some cheered for joy, others high-fived the crowds, and others burst to tears. It was emotional watching them. 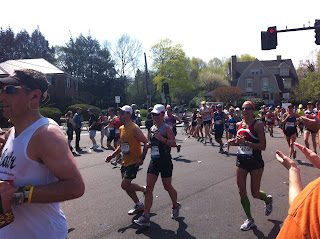 There was one scary moment where a runner collapsed due to the heat. Me and another guy had to carry him into the shade. Other people came over with water and bags of ice. We placed bags of ice on the back of his neck, arm pits, even in his pants to cool him off. I held his head slightly up and to the side as I poured water on his lips. He was dehydrated and was having a difficult time breathing. His name was Andrew. His name was on his shirt and on his ID tag along with contact info. Mid 30's maybe. His number was 5870. A few times I had to yell out his name to keep him alert. We stayed with his until the paramedics came. He was alert but still having trouble breathing. As they took him away, the crowed clapped and cheered for him.
I couldn't stop thinking about him all day ..... Great job Andrew.

It was a great day to watch the Marathon. Like previous years, I enjoy every single minute of it and dream of one day running it myself. I know I will never qualify. Maybe I'll just run it for charity. Or if the stars align perfectly for me and I score enough volunteer points through my running club, just maybe I could earn myself a time waved entry. I can dream can't I?
_

I have placed more pictures HERE if anyone is interested.

_
And I'll leave you with this 1min video I took of the runners: 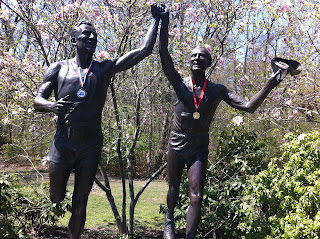 And great job to all the spectators that provided a variety of support for all the runners!

Thanks for sharing your spectator story. It sounds like a lot of fun!

What an experience that must have been! I am seriously considering volunteering just so I have an excuse to go and watch next year!

great post....and thanks for all the encouragement! Can't wait until you run your....where were you on the course yesterday? At one point, I saw a guy in an orange jacket and thought it might be you, but I didn't want to make a fool out of myself...

A big thanks to you for being out there cheering! The spectators really, really helped this year on so many levels. Couldn't have done it w/o you all!

My wife ran the Boston Marathon on our honeymoon 11 years ago. I spectated. Other than the Rose Bowl, it was the coolest sporting event I've ever been to (I've been to a lot). By the way, I've seen your race times and you qualifying for Boston is definitely in the realm of possibility, especially considering your work ethic.