Speed Workout today (Thursday). 4 Miles at sub 7min miles! Song of the run: Bon Jovi - Bad Medicine . This song came up on my iPod when I had 1/2 mile left in my run. And I needed it!! It gave me that extra boost I needed to keep my pace going til the end of my run. It was an awesome run today!

5 miles on Tuesday
7 Miles on Wednesday 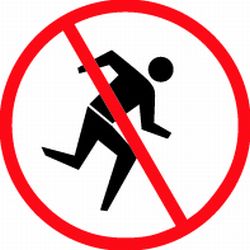 "You don't look like a runner". I was told this today by a new guy at work that saw me head out for my run during lunch. He said that I don't look like the runner type. We were having this conversation while I was working on his computer so couldn't really ask him what he meant by this. The funny thing is, this is not the first time some one had said this to me.

I think I know what they mean though. It's like when I go to races, I always look around at the other runners and some of these guys have that athletic build. They look like runners to me. Then there are other guys that dont.  I think I land on that side of the fence. Ya know what I mean?
Honestly it doesn't bother me. When I'm at these races and I see these "runners", I expect them to be faster than me. But it makes me feel good when at the end of the race I'm watching them cross the finish line after me.


Has anyone ever said that to you?

I've never gotten that, but there's definitely been races where I felt HUGE next to those uber-skinny guys! (Around most people I'm the skinny guy.)

No one has ever come out and said it to me, but I know some people look at me kind of weird when I say I run and do triathlons. They are expecting someone alot more fit. Maybe I'll get there some day!

I get that alot but just the other day a coworker told me a patient was looking for "Tracy the runner".....first time that's happened to me!